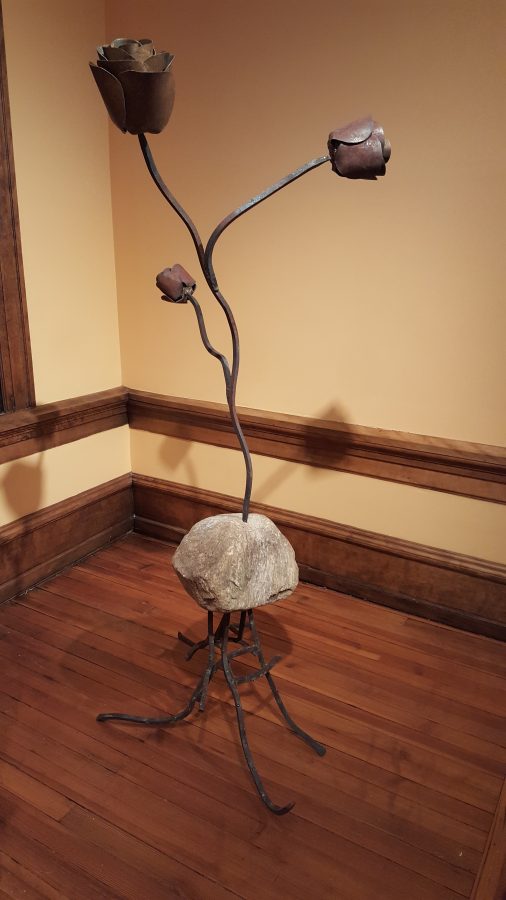 Connor Pirruccello-McClellan ’17 is one of a handful of senior art majors completing a thesis project. While not mandatory, completing a thesis is beneficial for artists who want to spend their whole year on one project or who may want to apply to graduate school.

“It was kind of expected of me as a fairly prolific maker of art to do something more than just keep taking classes,” Pirruccello-McClellan said of deciding to do a thesis.

Pirruccello-McClellan said he was also excited about the opportunity to do a year-long project and to display a full show of just his own work. He began creating a concept for his thesis centered on themes he had worked with in the past, including permanence and impermanence, decay, reuse of materials, rebirth and legacy. However, his project quickly changed.

According to Pirruccello-McClellan, all of the life forms of Venoca incorporate steel into their natural biologies, which is the material with which he primarily works in his art.

“I like doing organic forms of steel, and so where this all started was I made this [steel flower] and sort of asked myself, ‘If somebody showed this to me in Van Wickle, a science building, and it’s just on display with a little tag that said it’s scientific name, how would I justify that to myself?’” Pirruccello-McClellan said. “How would I think, ‘Okay you’re showing me this thing that you’re telling me is a scientific object, but competes with my preconceived notions of what a plant is?'”

“One of the biggest inspirations for this work is science, not art,” he said. “It’s sort of the era when science was just utterly amazing. Science is still fucking incredible and that’s pretty cool, but I think that we have become as a society just sort of desensitized to how truly amazing it is.”

Pirruccello-McClellan’s corner of the sculpture studio is filled with elements of Venoca, its creation and its representation. With something as subjective as art, the idea of a thesis defense seems unusual.

“In the process of making a thing, everybody has different input into it, but at the end, as long as you can justify why it is the way it is, you’re not going to get points off because it’s not the way they would have done it themselves,” Pirruccello-McClellan said of Lafayette art faculty’s mentality.

Pirruccello-McClellan said he hopes to eventually receive a master’s degree and potentially teach at the collegiate level, because he’s interested in helping students realize their own visions.