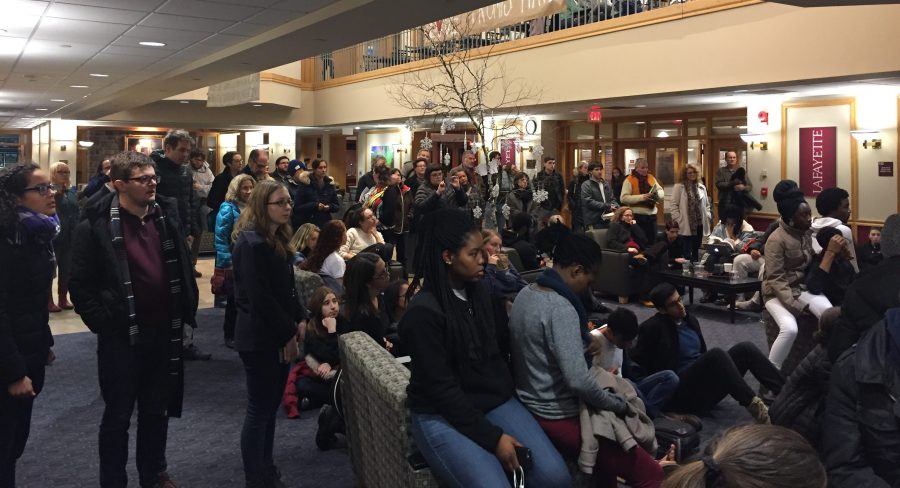 Although several members said it’s still in its nascent stages, the Easton Freedom Congress (EFC) is becoming a headquarters for community service and political activism at the college and in Easton.

The whole group, which has roughly 200 members, has had three meetings so far, but has begun to take some action.

Brought to life in the weeks after President Donald Trump was elected in November, the congress organized students and faculty earlier this month to rally against Trump’s immigration ban in Easton Centre Square. Members post social justice-related talks and political action tools in a private Facebook group. Those organizing Easton community projects have also used the congress to garner support.

It started after history professors Jeremy Zallen and Rachel Goshgarian spoke about what they could do after the election. They found themselves frustrated that no one at the college seemed to be taking strong action against, what was at that time, the incoming administration. They decided their first act was to publish an open letter in The Lafayette denouncing Trump and showing support for marginalized groups on campus.

“I felt like I just couldn’t be silent,” said Zallen, who had done almost no activist work before the letter and the EFC.

More than 80 faculty members signed the letter. At the end, it called for a meeting to discuss organization to help those who felt threatened by Trump.

The congress was born at that first meeting in November of last year, which had roughly 100 students, faculty and Easton community members. From the beginning, it was important to get a wide-range of people involved and to build a relationship with Easton residents, religious studies professor Jessica Carr said.

While it may seem like the EFC’s role may have shifted to encompass community-based projects rather than only overtly political action, Carr said this is not the case.

“I think that the idea was to come up with community projects and to get people together who were interested in community projects,” said Carr, who is the coordinator of the community committee for the congress. “And that came out of a political concern that the safety nets that have existed for those who are marginalized have been imperfect until now, but however imperfect they were, we were concerned that they might disappear altogether.”

Zallen said the congress’s horizontal structure with various committees allows it to be flexible. Committees and subcommittees are created based on goals and projects members want to pursue.

Erik Laucks ’20, a member of the community outreach committee, is one of the students using the congress to support a project to donate leftover prepackaged food from Lower and Skillman Café to a local food bank. Through the congress, he was able to get a list of people that said they would be willing to volunteer if the project comes to fruition.

Carr has worked with the congress to get more people to donate to shelters in Easton.

Others are spending more time looking directly at politics. Alicia Rosenbaum ’18 is working with other EFC members to have local and state politicians come to campus and give lectures to inform the Lafayette student body about what is going on in their community.

Valerie Melson ’17, who has experience as a community organizer from social justice activism on campus, is drafting a mission statement and a constitution for the congress, with feedback from other members.

Zallen chose the name of the group to reclaim the word “freedom” from conservative movements. He said that those movements began to appropriate the word to describe their ideas around the 1980s. The word is pervasive today in groups like the House Freedom Caucus, a conservative group of U.S. representatives.

Despite the right’s appropriation of the term, he said he still thinks “it’s the most important word in American political discourse.”

“Freedom’s something that people get out of bed for, will march for, will die for,” Zallen said. “It sort of transcends American ideas, anyway.”