Goals on goals: Women’s lacrosse off to torrid start 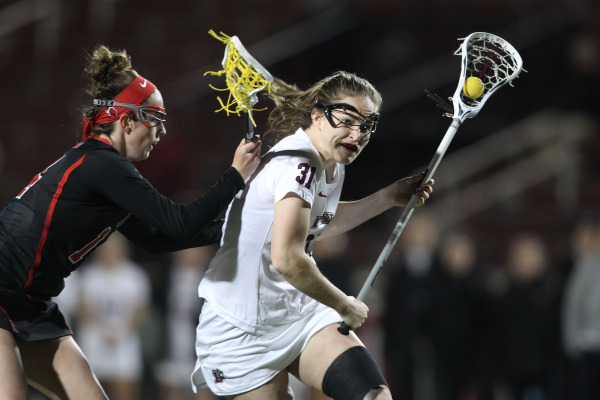 Kirsten Wilhelmsen '17 drives with the ball. (Courtesy of Athletic Communications)

After a school year in which there weren’t many positive stories about sports teams, the women’s lacrosse team is turning out to be a diamond in the rough.

Riding a three game win streak into their conference schedule, the women’s lacrosse team is arguably one of the best teams on campus. The team opened up the Patriot League portion of their schedule with a home game against Army on March 18.

The game was back and forth for the first half, with the score at halftime being tied at five apiece. In the second half, the Leopards were able to pull away from the Golden Knights and win by a score of 15-11. The Leopards outshot Army 37-22, and were also able to cause 14 turnovers.

Senior Kirsten Wilhelmsen was yet again the star for the Leopards, scoring five goals and adding an assist for a six-point game. With her performance, Wilhelmsen moved into the 200 career point club – one of eight Leopards in history to do so. Wilhelmsen’s performance this season has been nothing short of spectacular. Her 4.38 goals per game is best in the nation for Division I, and she has led the Leopards’ offense which ranks in the top 10 for scoring.

In addition to Wilhelmsen, the sophomore class may be equally as impressive. Jane Kirby scored three goals in the game against Army, and her classmates Mairead Janzer and Emma Novick also added two apiece.

Following their victory in the conference opener, the Leopards hosted Villanova on Wednesday in a game that was rescheduled due to snow. Although the Leopards were riding high on a four game winning streak, the Wildcats were able to shut them down en route to a 13-11 victory. With their loss, the Leopards were unable to move to 7-2, which would’ve been their best start to a season since 1991.

Wilhelmsen continued her torrid pace, netting four goals while Kirby added four of her own. The 11 goals scored by the Leopards were their least amount since their Feb. 21 loss to Rutgers when they scored just 10 goals.

Next up for the Leopards is a bout with the Colgate Raiders on Saturday. Lafayette will look to get back in the winning column and remain undefeated in conference play.