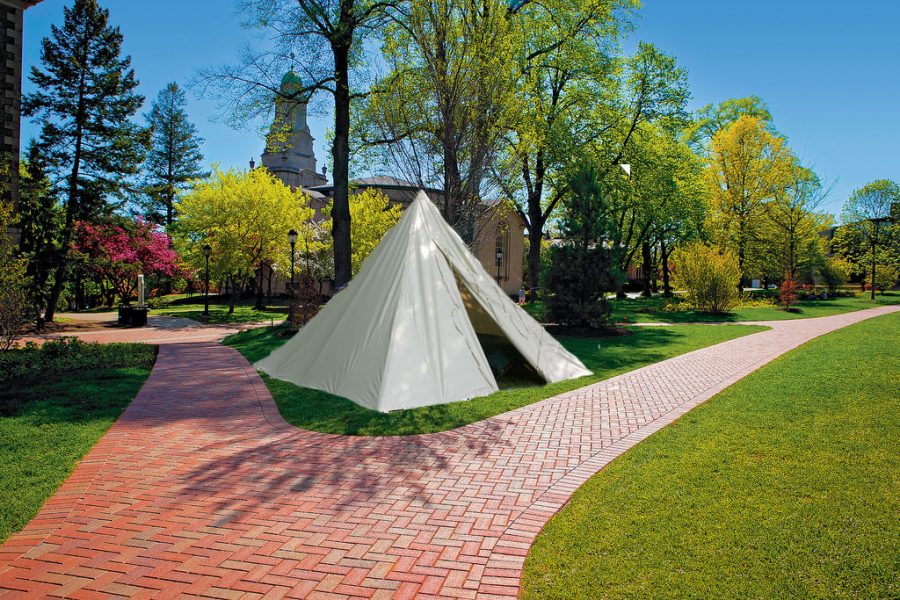 Students woke last Tuesday morning to find a tent pitched on the quad. Onlookers were confused until a crowd witnessed President Alison Byerly emerge at around 9 a.m., dressed in business casual and gathering sticks to build a fire.

“Temperatures dropped last night,” she said, “but luckily I was wearing my extra-warm pajama-skirt suit, which I had packed in preparation.”

“The cold is a small price to pay for the peace of mind I have in knowing that Lafayette could accommodate all its students’ housing needs,” she added, as her family stood shivering next to her.

Byerly later revealed that after learning that there were several students who would be without housing this semester, she packed up her family, left the president’s house and told her children they would live “by humbler means” from now on.

Her home would belong to the students now, she decided.

Joe Shmuck ‘21, new resident of the president’s house, said he appreciates Byerly’s sacrifice but is not sure what to do with the many family pictures the Byerly’s left behind.

“Their family portraits are great, don’t get me wrong,” he said, “but they just make me feel guilty because all I think about is how they live outside now.”

“I do really appreciate her doing this, though,” he added. “Her selflessness is outmatched only by her outdoorsy-ness.”

Byerly said that living on the Quad has deepened her connection to the campus wildlife. Late night conversations with Lafayette’s deer have led her to believe the college needs to build better housing for the deer and their families.

“There’s plenty of property the college owns where we could knock down existing homes and build accommodations that fit the deer’s planned population expansion,” she said.

Written by Between the Graham Crackers ‘007.