The friendly fields of Metzgar: Softball wins in home opener 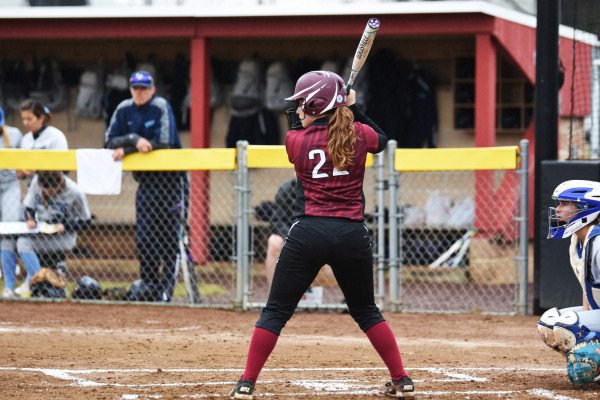 Stephanie Thomas '18 at the plate. (Courtesy of Athletic Communications)

After playing in South Carolina and Maryland for the first part of the season, the softball team had their first home game of the season on Tuesday. Before that, they began their conference schedule against Bucknell in Lewisburg.

The Leopards won Tuesday afternoon with two big hits from sophomores Brooke Wensel and Maddie Wensel. It was the team’s their first victory since March 5, winning 5-4 over St. Peters.

Lafayette came out of the gate hot putting two runners on before Brooke Wensel smashed a home run over the left field wall to put them up 3-0. St. Peter’s did not go down easily as they notched two runs in the third and then another two in the fourth to put them up 4-3 on the Leopards. Lafayette struck back in the sixth inning with a bases clearing double by Maddie Wensel to put the Leopards up 5-4 to secure the win.

Last weekend, the Leopards opened up Patriot League play with a three game series against the Bucknell Bison. The Leopards dropped all three games, but remained resilient through the first two games before allowing eight runs in their final game of the series.

They then went on to play St. Peters in a two game series at home on Tuesday, with the later game getting cancelled due to weather.

In the first of three games Saturday, the Leopards grabbed an early lead in the top of the second. Sophomore Brooke Wensel reached when she was hit by a pitch and was eventually bunted in by senior Jenna Orlando to put the Leopards up 1-0. Their lead did not last long as the Bison struck in the bottom of the second inning, plating one run to tie the game. The Bison’s Lauren Hadley then singled, stole second and scored to give the Bison all they needed to secure the victory, winning 2-1.

In the second of three games, the Leopards gave up four runs in the first three innings to Bucknell and were kept scoreless for the entirety of the game, losing 4-0. Their best scoring opportunity came in the fourth inning with Orlando on third with one out, but the Leopards were unable to bring her home.

The final game of the series also went to the Bison, as they played eight runs to the Leopards one. For the third straight game the Leopards were held to three hits as Bucknell’s solid pitching staff gave the women trouble all afternoon.

Lafayette, now 2-10 on the season, will host rival Lehigh in a three game Patriot League series this Saturday.