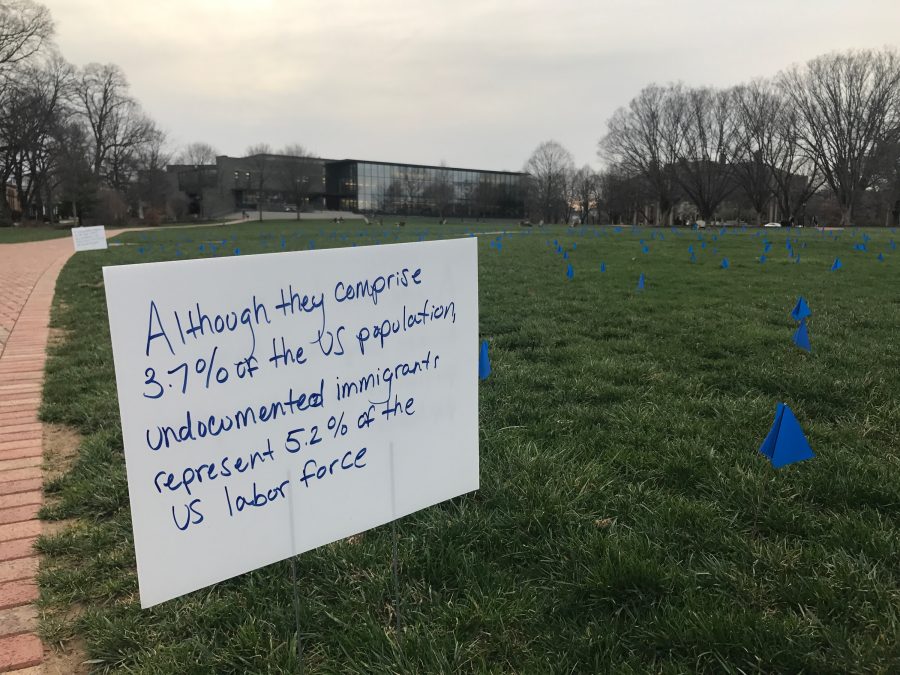 Students shared stories about immigration experiences on Wednesday at an open mic hosted by the Hispanic Society of Lafayette.

The open mic, titled “Real People, Real Stories,” is part of Immigration Week on campus. Earlier in the week, members of HSL covered a portion of the quad in blue flags, each of which represents a life lost crossing the Mexican-American border.

The event began with an introduction from HSL member and public relations representative Esmeralda Sotelo ’18.

Sotelo told the story of a friend and Salvador native, Jessica Ochoa, who lost her right leg on a cargo train in an attempt to cross the border. According to Sotelo’s story, by the time Ochoa reached the hospital, she had lost almost half of her blood.

“Most of the migrants from the central American countries like Guatemala, San Salvador, Honduras and Nicaragua, they cling to the train that some call the ‘train of death,'” Sotelo said.

According to Sotelo, Ochoa’s American Dream was to work hard and gradually save enough to buy a concrete home to replace the tin shack where she lived with the rest of her family.

“Like thousands of illegal migrants every year, Ochoa had been heading to ‘El Norte,’ which in Spanish means ‘the north’ but also means ‘the United States,'” Sotelo said.

After multiple attempts to get back to the United States, Villaverde’s mother finally managed to ride from Tijuana to California while crunched in a trunk with four others.

“All she could think about was how she wanted her baby to have a better life, not the life that she had in Mexico,” Villaverde said.

Brenda Badillo ’19 then read a poem by Jimmy Santiago Baca entitled “Immigrants in Our Own Land,” which discusses the difficulties and internal conflicts of being an immigrant in the United States.

Ayat Husseini ’20 told the story of her family’s experience in the United States. Husseini’s family came to America from Lebanon when she was three years old, after her father had been traveling back and forth to support her family financially.

Husseini said that coming to the United States right after 9/11, her family did have some expectations.

“We knew what we were getting ourselves into,” she said. “We were hearing the stories of the Islamophobia and what that meant. We started to realize if we didn’t try to assimilate we wouldn’t be able to survive.”

To close out the open mic, Jovante Anderson ’19 read a poem entitled “No One Leaves Home” by Warsan Shire, which Anderson said he believes “speaks to difficulties of the international students.”