The struggles continue: Baseball swept by Navy in a four game conference series 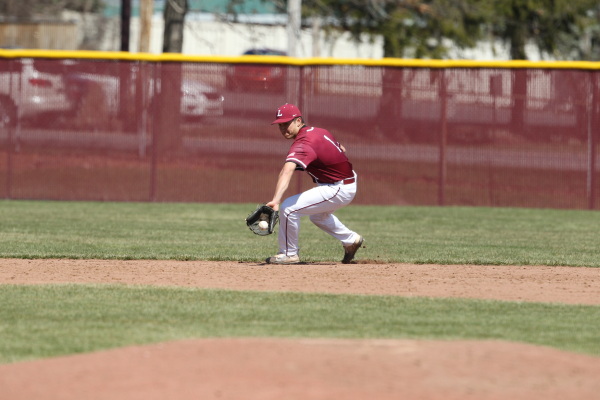 After going 1-3 in their first conference series of the season, the baseball team looked to grab a few wins against a good Navy team. But the Leopards were unable to stop the Midshipmen’s high powered offense and were swept in the series.

This past weekend, the team traveled down to Annapolis, Md. to take on the Patriot League leading Navy Midshipmen. In the first game, the Leopards kept the Navy bats at bay, but were unable to capitalize offensively and lost by a score of 4-1.

Senior Trevor Houck had a strong outing, throwing six innings and recording three strikeouts, while only surrendering two runs on the mound. After the Leopards gained a 1-0 lead in the first inning on a sacrifice fly from sophomore John Selsor, they only scattered four hits in the next six innings. The Midshipmen tied it up in the second inning and scored three runs in the final two innings to take home the victory.

In the second game of the day the Leopards were able to get the bats going, but a late rally from the Midshipmen handed them a 10-5 loss. After the two teams traded leads, it was the Leopards who were up 5-3 entering the seventh inning. That’s when the Midshipmen scored seven unanswered runs to take a convincing lead and win the game.

The third game of the series saw the Leopards bats struggling yet again. They scored first on an RBI single from sophomore Dan Leckie that scored junior Quentin Bubb, but didn’t score for the rest of the game en route to a 7-1 loss to the Midshipmen.

In the series finale, the Lafayette offense had a revival and put up six runs. Juniors Steven Cohen and Luke Robinson each collected two hits, while sophomore Richard Villa had two RBI to power the offense. Still, it wasn’t enough as the Leopards’ pitching struggled, leading to a 9-6 loss.

Following their four game series against Navy in which they were swept, the Leopards took on Rutgers in a non-conference game. After going down 7-0 in the first inning the Leopards responded with one run, but it wasn’t enough as the Scarlet Knights put up 21 more runs over the next eight innings on their way to a 28-4 victory.

The Leopards will travel to Lewisburg this weekend to take on the Bucknell Bison in a four game, Patriot League series.