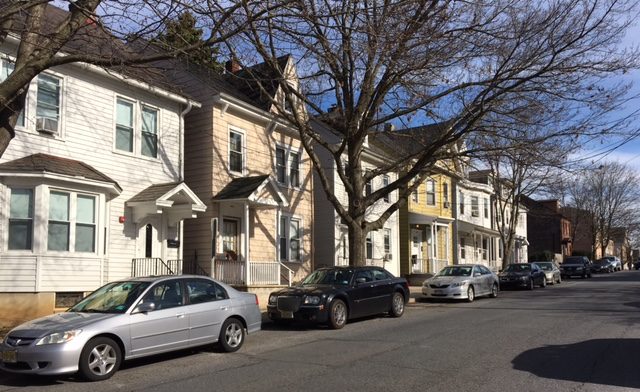 While the college looks ahead to knocking down houses on McCartney St. to build its new dorms, several College Hill community members continue to look back in the hopes that Lafayette will better recognize the rich history in the homes it plans to demolish.

These Easton residents are concerned that the college is not taking into account the historic value of College Hill homes, as they claim it lets them get rundown and shabby. Meanwhile, they say, it continues to purchase more properties on the hill, taking off the market homes that young families could otherwise buy.

Among those concerned is Peggy Palmer, who has lived on College Hill most of her life.

She grew up in the 1950s and 1960s across the street from Lafayette’s Theta Chi fraternity, and she said the brothers were often her babysitters. Professors were her neighbors and their kids were her friends, but over the years that changed. She said that the college used to feel much more like a part of the community, but has since become more like “a big business.”

“[Lafayette] needs to realize they are part of city Easton, but they’re only a part,” she added. “We are a city of neighborhoods. Each neighborhood is unique and special.”

Thomas Evans, another longtime College Hill resident who spent his childhood there, said that Lafayette has over the years enriched life on the hill, but he doesn’t see a reason why the college needs to expand into the neighborhood.

The college currently owns about 130 homes on the hill. It plans to demolish several homes on McCartney St. in order to construct its new dorms over the summer, pending approval by the Easton City Council.

Lafayette has said it has no further expansion plans for the next 10 years, but may demolish more properties after those 10 years are up.

Phil Mitman, former mayor of Easton and lifetime College Hill resident, said that the homes that the college has owned over the years have deteriorated.

“Until the college owned properties on McCartney and Catell, they were well maintained by the private owners, who mostly were families or businesses, and I know because I’ve lived here all my life, and I’ve seen how those properties have been downgraded since the college has owned them,” he said.

Lafayette professor and longtime Easton city planner Paul Felder said that the college has let their homes get rundown over the years. He went so far as to call Lafayette a “slumlord” because of the way it maintains its residences.

“Many of the properties the president describes as shabby were not shabby when the college bought them,” he said in a lecture at the college. “Part of the argument or part of the concern about the college moving into the community is that it has used…the shabbiness of its buildings which it has created by non-maintenance as an excuse for tearing them down.”

Vice President for Finance Roger Demareski said that the college does not buy homes in order to let them get rundown.

“There’s no plan to say, ‘Let’s let something deteriorate so we can take it down,’” he said.

In his presentation at the college on the ramifications of Lafayette’s expansion, Felder said that “almost all of College Hill is a historical district,” and the neighborhood in general holds historic character.

Easton resident Thomas Jones said he “personally surveyed and completed the national register nomination of College Hill historic district which comprises over 800 buildings.” Although the designation of the homes on McCartney St. does not prevent them from being demolished, Jones said that he thinks this designation should be taken into account in Lafayette’s plans for expansion.

“[The historic district designation] is a very pronounced definition of what’s called the established character of neighborhood, which is the oldest legal zoning law principle in Pennsylvania,” he said. “I’m wondering why that’s not been talked about more.”

The college also continues to buy more homes on the hill. Demareski said the school is often approached by the sellers themselves.

“Many times the resident comes to us and says, ‘I want to sell’ and ‘Are you interested?’ then we try to get to a deal, and, if it doesn’t make any sense, we say you should go out to the market,” Demareski said.

Felder said that there is irony in the fact that in order to become more affordable, the college continues to buy some of the most affordable homes on the hill.

“Particularly the area west of Cattell where the college has been buying property is the most affordable of the affordable housing on College Hill,” he said in his presentation.

“The neighborhood is aware of the irony that in order to make itself more affordable the college wants to tear down some of the most affordable houses in the community next to it,” he added.