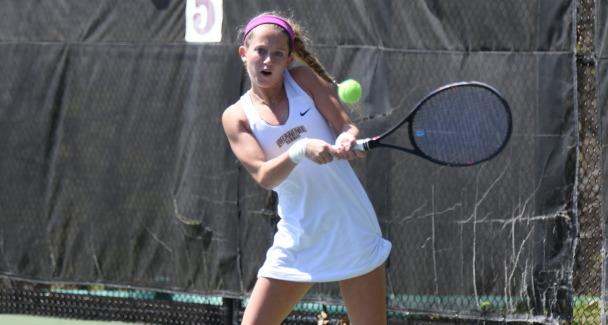 Amy Hewlett: You are just finishing up your first tennis season at Lafayette. How was your experience as a college athlete?

Grace Conrad: It was really nice because there were a lot of upperclassmen who helped me, and other freshmen on the team, get to know the school better. They helped us meet people, helped us pick classes and professors and gave us tips about college. The seniors also helped us transition from high school to college tennis.

AH: You have been a standout member of your team this season. How do you feel about your performances?

GC: I’m really happy with my performances. I think I surprised myself at certain matches, and, overall, I’m happy with how it went, and I’m excited for next season to see what will happen.

AH: With no rising seniors on the team, how do you think your role on the team will change?

GC: I think we’ll need more leaders, so any junior or sophomore will need to show leadership. We each need to show the new freshmen what our upperclassmen taught us.

AH: What are some things you’d like to see next year?

GC: We could improve on our attendance to things off the court, like conditioning and lifts. It’s also important we keep our morale. It needs to be a combination of fun and seriousness.

AH: What is your favorite part about being on a team?

GC: I love the girls that are on the team. It wouldn’t be as fun without them. We are also very close with the boys team, which makes us feel co-ed. It’s like we’re a big family.

AH: What do you hope to accomplish, individually and as a team, next year?

AH: How did you get into tennis?

GC: In my town, we have a really big tennis club. First, I played soccer, but I didn’t like that so I switched to tennis.

AH: How do you prepare for matches?

GC: I make sure that I’ve hydrated beforehand. I also get blue Gatorade for my matches, pack my bag, and bring my headphones. I listen to music before the match, but that’s pretty much it.

AH: Who is your favorite athlete?

GC: Roger Federer. He’s been playing for so long and hasn’t really ever been injured. He’s so graceful and keeps his cool on the court.

AH: What is something people don’t know about you?

GC: I’ve flown a plane before.