Hanging their heads high: Men’s tennis wins in opening round of Patriot League Tournament before being ousted 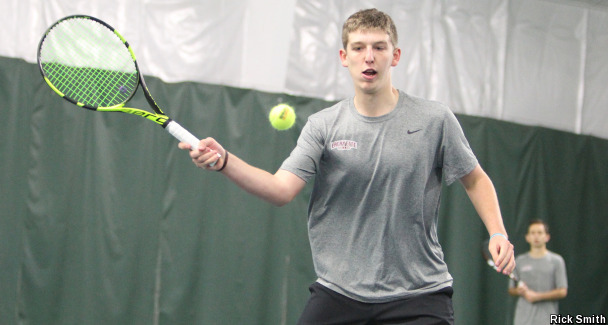 After struggling to the finish line in the regular season, the men’s tennis team can hang their heads high with a Patriot League Tournament victory in the first round over Holy Cross. That wasn’t the case for the women, however, with their regular season ending in a loss to The College of New Jersey.

The men’s team lost their last eight matches of the year, winning just three points in all of those matches combined. As a result, the Leopards were the eighth seed in the conference tournament and were pitted to go up against ninth seeded Holy Cross in the first round.

The freshmen were the stars for Lafayette, as Blake Oslan and Paul Caruso both won crucial singles matches. Oslan won his match 6-1, 6-0, and Caruso defeated his opponent 6-3, 6-3. The duo also paired up to win a doubles match 6-1. The team of sophomore Matthew DeBenedetto and junior Mason Keel won the other doubles match to secure the doubles point for the Leopards. The other singles point came from sophomore Andrew Reed who defeated his opponent 6-1, 6-3.

After defeating Holy Cross, next up on the Leopards’ slate was the top seeded Army Golden Knights, who they lost to earlier in the year 5-0.

Army was in control for the entire match, as they didn’t drop any of the five deciding matches. The team of Reed and Oslan had a 5-3 lead in their doubles match, but it was cut short as Army finished off the other two doubles’ opponents to clinch the point. Oslan also had a strong singles match, only trailing 6-3, 4-4 to his opponent when his match was called off after Army had clinched all three available singles points.