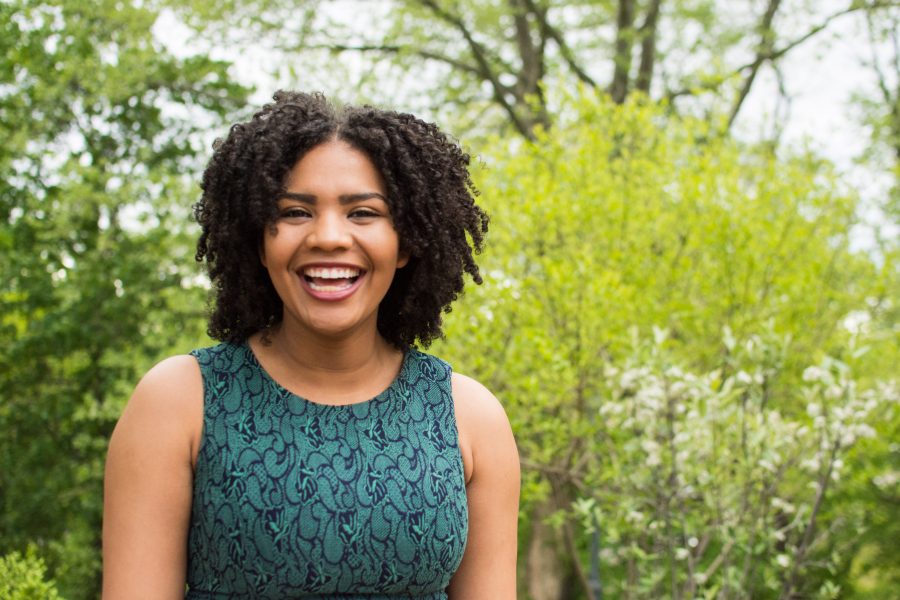 Pepper Prize winner Valerie Melson ’17 arrived at Lafayette optimistic about the sense of community she saw, and she leaves after working to make that community more welcoming to students of marginalized and diverse identities.

A neuroscience major and Posse Scholar, Melson found her voice as president of the Association of Black Collegiates (ABC) and a coordinator for Kaleidoscope, a social justice peer advocacy group on campus.

Before she got to Lafayette, Melson said she was raised seeing black people in powerful roles, which gave her confidence early in life.

“When I talk to my friends at Lafayette who are black, they might not have seen black professionals in certain roles or in certain positions, but because of where I came from, I got to see that,” Melson said. “My mom took me to events – she was a lawyer – I got to see rooms full of lawyers who looked like me, so it really set me up to let me know that I could do anything.”

Melson is an accomplished student, but she said that she’s particularly proud of her work on social justice issues on campus.

She helped organized a college-wide discussion about the University of Missouri student protests highlighting racism on campus. There were 400 students in Farinon atrium.

“The atrium was full so much that people were on the balcony, listening in….The campus community just came out to discuss this issue,” Melson said.

Continuing her social justice work this school year, Melson was integral in creating the list of concerns from marginalized students delivered to the administration. The list was focused on creating a more welcoming environment for students of diverse identities.

“So many facets of the community that have marginalized identities came together to create this document and to say, ‘Here’s how you can support us better,’” she said.

The list of concerns led to the creation of the Equity, Transformation and Accountability Board, which Melson spearheaded. The board will work with the new Dean of Equity and Inclusion Chris Hunt in the fall to advocate for marginalized groups on campus.

All of this was only the beginning of Melson’s plans to work on social justice issues in the coming years, as she plans to pursue a career in medicine.

“When I think about what’s next for me, it’s important that I’m not just a good doctor, because I think I’m positioned to think about things that other people might not when we think about healthcare,” she said.

She said she found a mentor early on in biology professor Robert Kurt, who helped her worked toward her goals in medicine. The two hit it off after being matched through a research program her first year.

Kurt has helped her find internships and recommended Melson for the Annual Biomedical Research Conference for Minority Students. According to Melson, this experience helped her feel like she belonged in the scientific community.

With the MCAT now behind her, Melson has begun the application process for medical schools this week, with plans to attend in the fall of 2018. Next year, Melson will work with Dr. Susan Moore at the National Institute of Health.

“I do have a research background so I would like a school that has research, but more important to me is a school that focuses on public health [and] discusses issues of access,” Melson said.

Out of the 22 places she applied, some of her top choices are the Mayo Clinic, George Washington University and Geisinger Commonwealth School of Medicine.

She added she wants to know “how we can talk about things like diabetes in new lights, and not just say, ‘Well, here’s a prescription, and I know you’ll be here in a little while.’ But actually, ‘Can we provide you with food or a nutritionist, or teach you how to cook properly and make it affordable so that you’re more likely to do it, and put the food closer to you so that you have access to it.’”

Ultimately, she said that her goals extend beyond becoming a doctor.

“If I had to be as ambitious as possible, I would say [that my long-term goal is to be] Secretary of Health,” she said. “I think my mind naturally goes there just because of where we are politically right now.”

But for now, Melson is enjoying her last few weeks at Lafayette, and is currently planning how she’ll decorate her graduation cap.

“I’ve been going through a lot of quotes, and I think the one that I like right now is, ‘This moment is about more than just me,’” she said.

In regards to this award, Melson said she accomplished what she did not by herself, but with the people who supported her.

“I’m excited, I’m honored, and I’m happy,” she said. “But it really was a community effort. Posse had my back throughout this process….Every single thing, it wasn’t just me…Someone was always there helping or guiding or laying the foundation.”