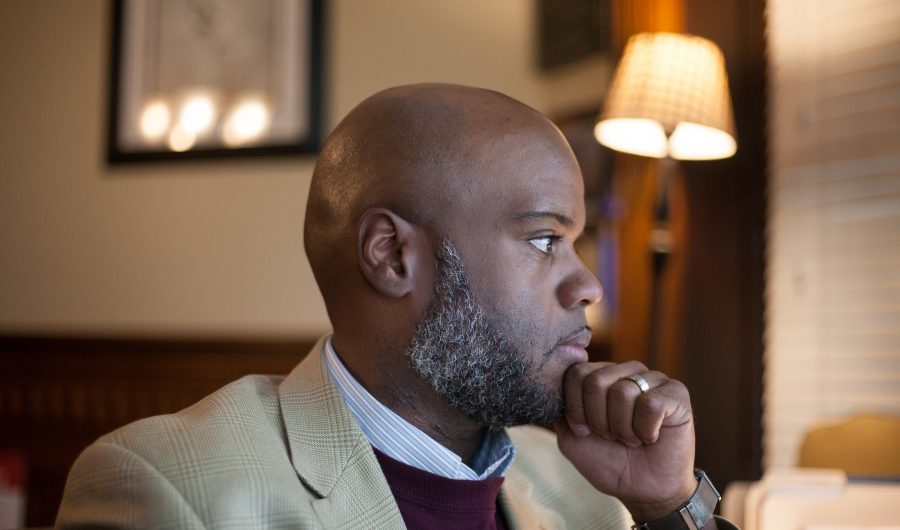 Having moved into his new office space in Feather House, Dean of Equity and Inclusion Chris Hunt is ready for his first year back on campus with an open door and a Dwight K. Schrute mug on his desk.

Before he spent nearly a decade working at Moravian College as their Associate Dean of Students and Director of Intercultural Advancement and Global Inclusion, Hunt worked for four years in Lafayette’s office of Residence Life, from 2003 to 2007. When Hunt’s daughter was born, she was brought home to the faculty apartment in Kirby House, and his family later moved to the Kamine faculty apartment.

He returned to Lafayette this summer assuming similar responsibilities of the former Dean of Intercultural Development John McKnight. Hunt said he feels that the new title reflects the growth of the position over the years.

Hunt had the opportunity to describe his role this past week to the class of 2021. He explained at first-year orientation that his role is “broadly defined is to make sure every student has access to what they need in order to be successful and integrate into the community, and that the community is integrating them.”

According to Hunt, his role will still be to work with organizations such as Associate of Black Collegians, NIA, QuEST and Hispanic Society of Lafayette, who have worked with the Office of Intercultural Development in the past. However, he wants his office to reach out to other organizations such as those in Greek life, sports teams and Lafayette Activities Forum.

In this effort of extending himself to students, Hunt plans to draw on his experience as an adviser during his earlier years at Lafayette.

Hunt feels his years at Lafayette and experience at Moravian will help his transition. However, there are several things on campus Hunt feels he needs to better understand, such as the highly debated Mill Series that started last spring.

“I want to understand it first. I think I want to wrap my head around what it is,” Hunt said. He plans to both meet with government and law professor Brandon Van Dyck, the adviser for the series, and to attend a few events.

“I’ll be at the one in October. I just want to experience it for myself,” he said.

While the Mill Series has been a cause of tension on campus, Hunt feels in light of recent events, facilitating conversation on campus with different viewpoints is important.

“After Charlottesville happened, Donald Trump said ‘both sides,'” and that false equivalency can result in a misunderstanding of Hunt’s call for intellectual discourse on campus, he said. “That…meant something else. What I do want is for us to learn from each other.”

While getting involved in serious and divisive issues on campus is a priority for Hunt, he is also eager to just meet students and connect with them through a shared passion of food.

“I like to cook, and I heard students like to eat. So, once in awhile I like to try and merge those two things. I’ll probably try to bring some of those hobbies here,” Hunt said. “I think those close moments to interact with students are helpful.”