Bringing back the data in sustainability efforts: college emissions down 14.3% since 2008 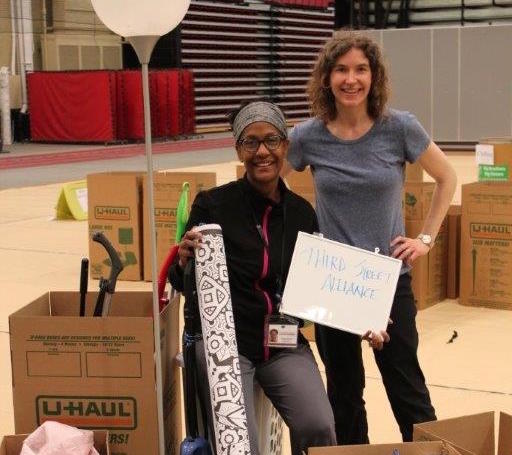 Since starting last November, Lafayette’s first ever Director of Sustainability Marie Fechik-Kirk has made headway in demonstrating the school’s progress in reducing greenhouse emission and increasing visibility of sustainability on campus.

One of the first things Fechik-Kirk was tasked with was assessing the college’s progress toward its 2011 climate action plan aimed at reducing carbon emissions by 15 percent by 2027 from its 2008 baseline.

The college had fallen behind on reporting its emissions and compiling data necessary to determine progress since it formed the climate action plan in 2011. Fechik-Kirk and campus energy manager Nick DeSalvo were tasked with organizing this data to assess the college’s progress and planned on submitting an updated plan to Second Nature in 2018.

Over the summer her team worked to fix that problem and ensured that the school’s numbers are all up to date on the Second Nature website, Fechik-Kirk said.

According to Second Nature, the college has currently experienced a 14.3 percent net decrease in emissions since 2008. The next goal for the college is to then reduce their green house emissions by 35 percent by 2031.

Aside from compiling data, Fechik-Kirk took on several other initiatives to help make sustainability more integrated on campus.

One of these projects aimed to improve the school’s recycling program. Working with custodians, the college’s interior designer and facilities operations, Fechik-Kirk and her office designed a bin standard for recycling cans that have been placed in parts of Acopian and most of Farinon. The cans are meant to be as sustainable as possible, and they’re made out of recycled milk jugs.

Aside from the new design, the team wanted to create clearer signage to increase visibility and help people to understand what and how they can recycle.

“It will make it easier for people to recycle,” Fechik-Kirk said. The new signage has made its way into Pardee, Skillman Library and Acopian so far, but should soon be integrated throughout campus.

Green Move Out in May was also a success, Fechik-Kirk said. In this initiative, students donated ten tons of resources, eight tons of which were usable. This event partnered with several local organizations and was able to provide resources and supplies they cannot afford.

“Overall it helped over a dozen local organizations. That’s everyone from Safe Harbor. We had Third Street Alliance. We had the Easton Area Community Center. That’s a lot of places where students from LANDIS are already working,” Fechik-Kirk said.

In August, the college expanded its Green Move In initiative. Four POD storage containers were placed around campus for a couple of days so that students could recycle their cardboard, plastic and Styrofoam waste. Fechik-Kirk approximates the school collected nearly 60 pounds of plastic bags and 30 pounds of Styrofoam.

The Green Move In was also an opportunity for students to meet their EcoReps, who are looking to take on a stronger role as well this year. Individual EcoReps will be taking on projects such as creating volunteer opportunities for all students or looking into incorporating bicycles on campus.

Fechik-Kirk has also partnered with a few student groups outside of EcoReps in different ways, including a food recovery initiative she hopes to expand this year.

“We had a group of students all get involved and we were taking food from the dining hall and then recovering it by bringing it to Safe Harbor. That was a partnership with LANDIS,” Fechik-Kirk said.

By getting students involved in sustainability initiatives on campus now, Fechik-Kirk hopes to create leaders that will enact sustainable changes long past graduation.

“If we can get people thinking about these habits early then that makes a big difference,” she said.