The home-run binge: How improved managing strategies are making their mark on the MLB 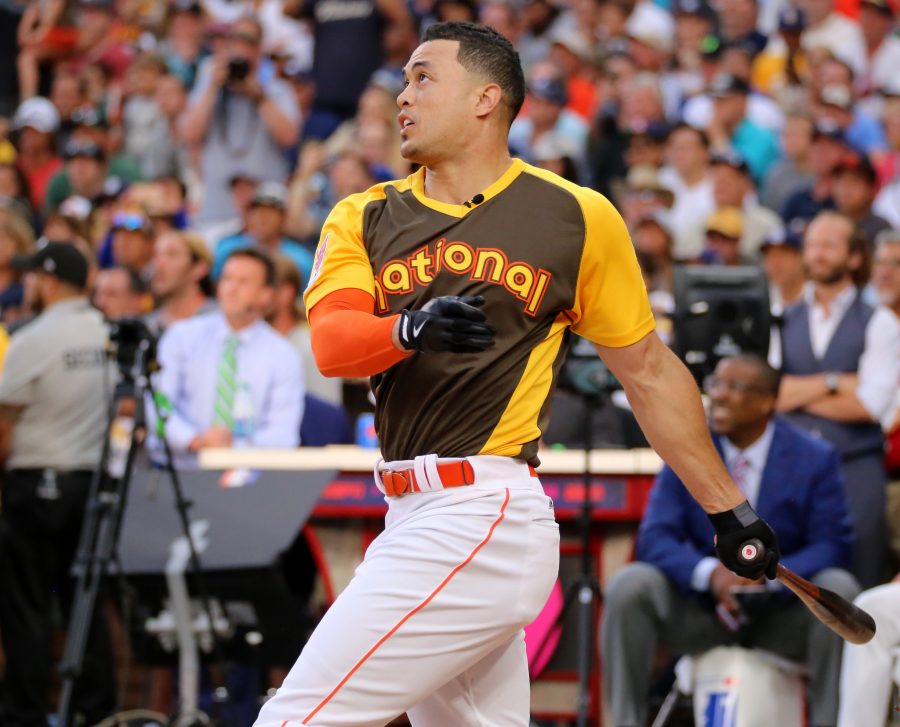 Marlins OF Giancarlo Stanton leads MLB in home runs, pulling away from Yankees OF Aaron Judge in the second half (Photo Courtesy of Wikimedia Commons)

This season, Major League Baseball set a new record for most cumulative home runs hit by all players in one season: 5,694.

One would think that this record was set a couple of decades ago, probably during the 90’s into the early 2000’s, the time period commonly referred to as the steroid era.

In 1998, the famous battle for the home run leader between Mark McGwire and Sammy Sosa was underway, with those two players alone combining for 136 home runs that season. They both broke the previous home run record of 61 in a season by Roger Maris, and Barry Bonds broke that record just 3 years later with 73. That record still stands as the most home runs by a single player in a season.

It may be a surprise to you that with Royals outfielder Alex Gordon’s eighth home run of the season just this past week, the league reached grand total of 5,694 home runs in a season. Why now though? In an era that was seemingly gaining popularity for the abundance of exceptional pitchers like Clayton Kershaw and Max Scherzer, we’ve seen a dramatic shift to offense in just under a few seasons.

There are two standout reasons for this shift: improved athletes and improved managerial skills.

With regards to the former, we can point to the vast improvements in technology and fitness. With more resources than ever before being readily available to rising athletes, they are able to reach peak performance in a multitude of different ways.

We are seeing better athletes than ever before, with players possessing rare size and strength that could be straight out of a video game.

Take a look at Yankees superstar Aaron Judge. At a staggering 6’7 and 282 pounds, Judge looks like he should play for the New York Giants instead of the Yankees, but that’s what makes him so intriguing. He possesses immense raw power and is second in the entire MLB with 45 home runs this season. He stands as a microcosm for the entire league, however, with 31 players at or above the 30 homer threshold this season, not to mention the 7 players with 29 (as of 9/20/17).

This is only a part of the equation though. Another factor to consider is the changing managerial style that has allowed these hitters to flourish in a way that is unlike anything we’ve seen before.

Previously, you’d put your best power hitters as either 4th or 3rd in the batting lineup in order to maximize their chances of driving in base runners. We’ve seen a shift this season, more so than any past seasons, where we see power hitters batting second and even leading off at times. The reigning World Series Champion Chicago Cubs have used slugging catcher/outfielder Kyle Schwarber as their leadoff man for long stretches during the season, and the Yankees have recently tinkered with putting the aforementioned Judge in the 2 hole.

Why has this impacted the home run totals in such a drastic way though, and what has made this change so sudden?

Putting your power hitters first comes from basic thought but is an ingenious strategy. If these are your best hitters, wouldn’t you want them getting up to bat as often as possible and giving them as many opportunities as you can? It’s a way for an offense to start out strong, giving their lineup a jolt by having your best players bat first. The pitcher therefore faces a new dilemma.

In the traditional lineup, with power hitter third or fourth, that player had to hope his teammates came through by getting on base so that he could drive them in. Otherwise, he was up with two outs and the pitcher wouldn’t have to give him anything good to hit.

Now that the power hitter starts the game, however, the pitcher cannot afford to walk the leadoff man with nobody out. It puts the defense in a dangerous position. He is then forced to pitch normally to him, as if he were any other batter, and that allows him to take advantage of good pitches, sending them soaring over the outfield fence. With an increased frequency of at bats and more opportunity to see hittable pitches, this season has become a dream for sluggers.

Why are we only seeing this now? Well, maybe it has just taken us some time to see the trends unfolding in front of us. Some teams have been trending this way, with Curtis Granderson leading off for the Mets the past couple of years, along with Joey Votto hitting second in the Reds lineup. This has become a much more widespread practice, and with the ever-changing and funky managing tactics that we’re becoming accustomed to seeing, another big change is most likely right around the corner.