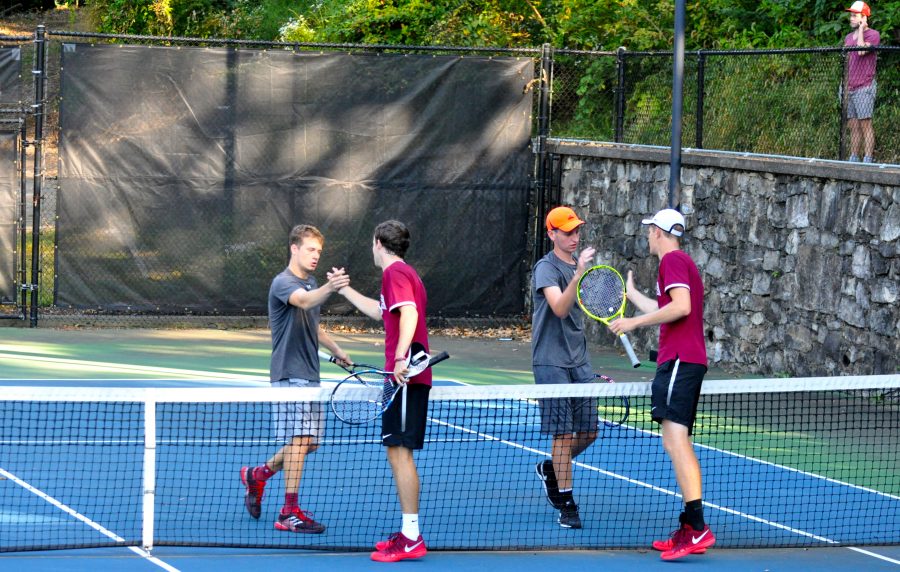 Last Sunday, the men’s tennis team faced Muhlenberg College. The team fell to Muhlenberg in doubles, but Lafayette was able to emerge victorious in the singles matches, winning 6-1.

“Our doubles performance was poorer than what we expected,” senior Mason Keel said. “We lost the doubles point to them but it was definitely a wake up call for future matches. We have never struggled against Muhlenburg before but it was good to sweep them in singles even when we weren’t playing our best tennis.”

Despite an overall great team performance, Keel said the freshmen really stood out.

“All three of our freshmen, John Yurconic, Brandt Baldwin and Daniel Kramer are all stand out players for the upcoming season,” he said. “They have already shown that they are not afraid of performing on a bigger stage.”

“Matt DeBenedetto won a tight match which was great,” he said. “He’s been playing well all season so he was definitely a standout player.”

This fall, the team has been focusing on identifying their strengths and weaknesses. Going into the spring season, both Oslan and Keel felt addressing their weaknesses were important to future success.

“As a team with so many new players this year, we are still trying to learn what everyone’s strengths and weaknesses are,” Oslan said. “That’s what we wanted to do this fall season, see where we are at and try to start to figure out our lineup and from there going into the spring season start working on those things.”

“I definitely think we need to address our weaknesses,” Keel said. “Especially after our most recent match, the number one weakness being our mental game.”

With the fall season in full swing, the team plans on ending this season on a high note.

“We have a Lehigh tournament in the next couples of weeks and our last match is against St. Peter’s,” Oslan said. “They’re a team which we lost to barely last year so we are looking forward to having another chance to beat them.”

“Our number one goal this season is to get more wins than last season,” Keel said. “We are really focusing on beating teams this year that we lost to last year in close matches, mainly Loyola since they are one of our bigger Patriot League rivals.”

The men’s team will be competing next in the Lehigh Tournament on the 13th, 14th, and 15th of October.