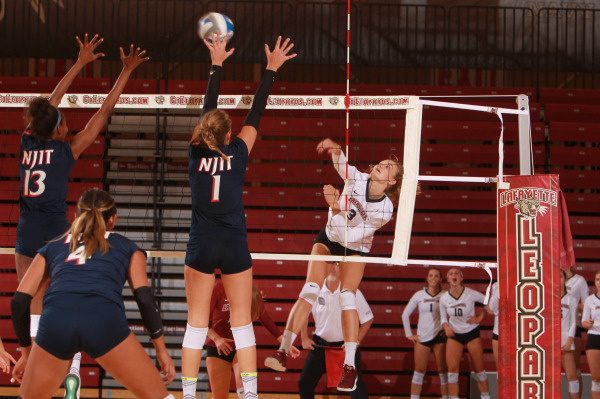 Christian Luhnow '20 hits the ball over the net (Photo Courtesy of Athletic Communications).

The Lafayette Leopards and the Lehigh Mountain Hawks met on the volleyball court for the first of their two rivalry matches of the season on Sept. 30. Lehigh hosted this first game, and Lafayette will host the home rivalry game on Oct. 28.

“We felt pretty strong. We came off a weekend where we beat Holy Cross. We played pretty well against Bucknell that weekend too,” senior captain Tori Smith said.

“Always going into that game, there’s a lot of extra energy and excitement because we hate Lehigh and they’re the worst. We’re always a little bit more keyed up than usual and expect to play better than most matches,” she added.

To prepare for this game, the team watched films to pick apart Lehigh’s strategy so they could target their weaknesses on the court, sophomore Christian Luhnow said.

“We knew that they are trained to pass hard, driven balls so we knew that the best way to mess them up was to do some short shots and some deep tips and just try to change it up,” Luhnow said.

Although the Leopards fought hard and kept up their excitement, Lehigh walked away with the win. Lafayette started the game strong and the first two sets remained a close battle, but Lehigh won the sets by a few points each. In the third set, the Leopards came out swinging and earned a win. Unfortunately, Lafayette lost their momentum and ended the game with a losing set of 13-25.

“Keeping our energy up and our mental toughness strong was a huge weakness for us towards the end of the match,” Luhnow said. “Everyone did their individual jobs really well and when people were subbed out, they were really supportive.”

“We understand that goals are time sensitive, so every two weeks we reevaluate what exactly our team needs to be successful. We’re working on measurable statistics to improve our overall performance,” Smith said.

The team is especially young this year with just two seniors, no juniors, five sophomores, and seven freshmen. Although the team does not have much experience yet, they make up for it with their energy and enthusiasm for their season, she added

“By the time I graduate, I want them to be a fully functional team that can lead themselves and feel like they can be a well structured team,” Smith said.

The team will head to Annapolis, MD to take on Navy on October 6th for their next match.