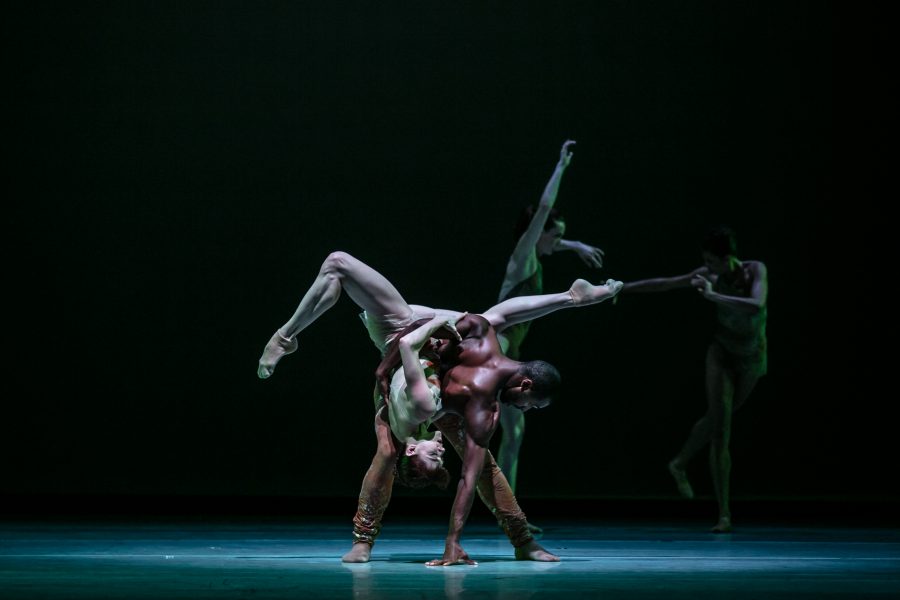 Alonzo King LINES Ballet performed in the Williams Center for the Arts on Tuesday (Courtesy of Quinn B. Wharton).

The Alonzo King LINES Ballet, based in San Francisco, visited the college while touring in celebration of the ballet’s 35th anniversary. Audience members who attended the sold-out show at the Williams Center for the Arts experienced art–whether it was dancing to humpback whale calls, the sound of a beehive or making their own screams, the dancers in King’s LINES ballet put on an unforgettable show.

The Tuesday performance perfectly combined the technicality of ballet with the free movement of contemporary to create a truly unique experience. The first half of the show was danced solely to background sounds of animals and nature, which made those dances breathtaking.

The ballet incorporated astonishing flexibility, clean lines, small movements as well as fluidity of the body, breaking traditional molds of the ballet dance. The dancers repeatedly bent their bodies into odd formations to interpret the background sounds, which was incredibly fascinating.

Throughout the show, audience members held in gasps and darted their eyes to keep up with the dancers’ every move. Throughout the entire performance, whether there was one or all 11 dancers on the stage, every moment was captivating. Each piece blended seamlessly into the next and the dancers never left the stage empty.

According to the performance’s program, King uses his own creativity to capture the world through ballet. The name “LINES” alludes to all that is visible in the phenomenal world, according to a quote from King in the program. King uses lines to connect his choreography to the world, which is explained in the program.

It was clear in this show that many dances were very sensitive and emotion-evoking, playing into King’s stages of the heart that he emulates through his pieces.

The second half also featured more partnering and synchronized dance than the first half. Halfway through “The Propelled Heart,” one piece involved two couples dancing a combination of ballroom, balloon and contemporary styles. The chemistry between the couples was amazing and their astonishing flexibility and ease of partnered lifts struck the audience, earning the dance a loud applause.

King’s company features dancers from all over the world including Germany, Canada, The United States and South Korea, and the company travels internationally to perform.