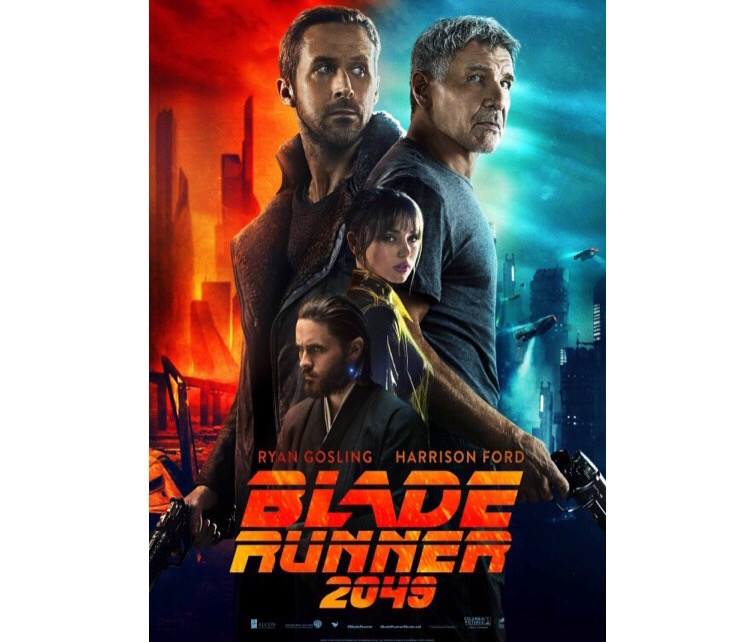 The film follows LAPD Officer “K” (Ryan Gosling), a special detective on the hunt for Nexus 8 Replicants, androids that have the ability to live forever. K searches for Rick Deckard (Harrison Ford), a former blade runner who has gone missing.

While I don’t have the same love that a lot of cinephiles have for the original “Blade Runner,” I adored “Blade Runner 2049.” Throughout the entire film I was engrossed by the jaw-dropping visuals and world-building. Unlike many modern movies, “Blade Runner 2049” perfectly weaves practical visual effects and CGI so that audience members can’t tell what’s real and what’s fake. I ended up just accepting everything to be real and falling in love with the dystopian world that was on the screen.

The filmmaking craft throughout the film is incredible. Roger Deacon, director of photography, creates some of the most stunning cinematography I’ve ever seen. The balance of contrast evokes the true dystopia of 2049. The sound design, production design, costuming, hair and makeup all come together perfectly to bring both Villeneuve and Scott’s visions to life. The score by Hans Zimmer and Benjamin Wallfisch fits so well with the feel of the film.

In terms of casting, Harrison Ford returns as Detective Rick Deckard and delivers an Oscar-worthy performance, captivating the audience more than he ever has before. Beyond Ford, nearly all of the performances in this film are superb. Dave Bautista, known for his performance in “Guardians of the Galaxy”, plays a very quiet and subtle character, but makes his time on the screen immensely powerful. Newcomers Ana de Armas and Sylvia Hoeks bring action and passion to the table, which leads me to believe that we will definitely see them again. In his role as K, Gosling demonstrates his consistent ability to breathe limitless amount of life and depth into any character he plays.

“Blade Runner 2049” had everything going against it and many thought it would end up like last year’s film “Independence Day Resurgence.” However, the team behind this film truly executed their vision with precision and care and created a masterpiece. I loved “Blade Runner 2049” and I think it is one of the best films from 2017 and will definitely be back in talks when Oscar season comes around. “Blade Runner 2049” receives a 19/20.