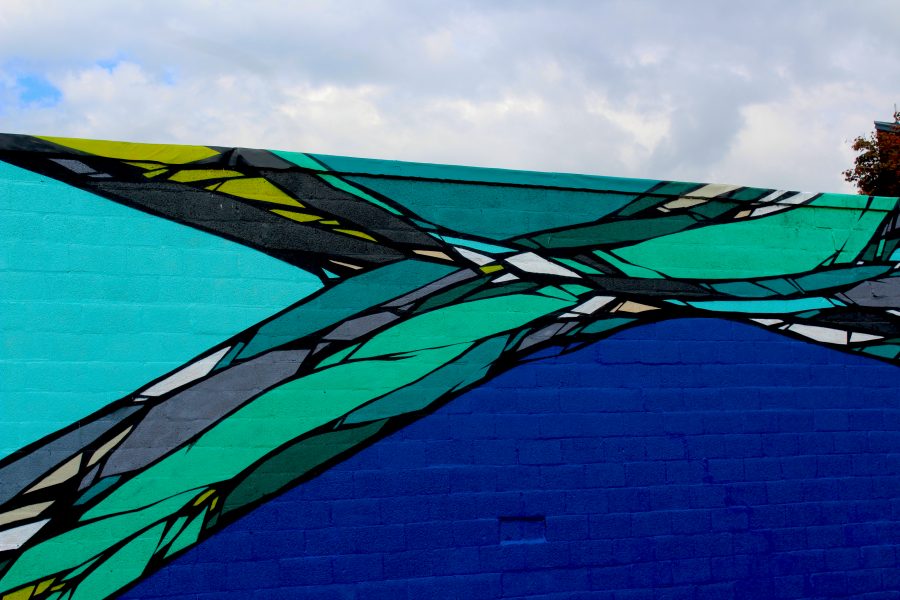 The first mural in the Easton Murals Project.(Photo by Adrianna Barazotti '21)

Easton Main Street Initiative will dedicate the first mural in the Easton Murals project tonight. Located at 49 N. Bank Street in downtown Easton, the 75-foot by 15-foot mural mural was completed in August by Easton native and artist Giancarlo DeMarchi.

The mural comes as the first in a series of pieces to be completed by Easton Murals, a project by Easton Main Street Initiative (Main Street) as well as the Brick + Mortar Gallery owners Tom D’Angelo and Chaz Hampton.

According to Amy Boccadoro, Assistant Manager and Marketing Director for Easton Main Street Initiative, Main Street had worked with the gallery owners previously in completing a mural on the side of Lauter’s Furniture Store in downtown Easton. The group was also interested in redoing a mural on the side of the Kaplan’s building, which can be seen when crossing the Free Bridge from New Jersey, Boccadoro said.

While D’Angelo, Hampton and Main Street are interested in returning to the project in the future, it was becoming too costly to complete, Boccadoro said.

“The idea was that we could work with smaller murals to try and get more of an effort in Easton to have more murals and hopefully that would generate some interest for when we did want to look at some larger pieces,” Boccadoro said.

For the first mural, finding an artist to complete it “fell right into place,” Boccadoro said. Because of DeMarchi’s good following and popularity amongst locals, Main Street thought he would be a good fit for the job.

In the future, Main Street will put out a call for artists when looking for artists to complete future projects. The artist call for the next mural will be posted soon, Boccadoro said. Both D’Angelo and Hampton have relationships with other national artists, which may lead to the opportunity to have larger names come in and do work, Boccadoro said. However, Main Street will also continue to work with Easton area artists as well.

The location of the next mural will be a retaining wall at Spring Garden and Bushkill streets, a wall jointly owned by Genesis Bicycles and Berkshire Hathaway HomeServices, the press release states.

According to Boccadoro, there has been a lot of community support for Easton Murals, which in large part funded the first piece.

“There were donations made, we did a basket raffle for $1,500 worth of downtown Easton restaurant gift cards and we raised pretty much a majority of the dollars with that,” Boccadoro said.

The second mural, however, will be funded by a $2,000 grant from the Lehigh Valley Chamber Foundation. There will also be a bicycle raffle at tonight’s dedication that will also help fund the mural.