‘An adventure of laughter’: Aasif Mandvi takes on islamophobia, cultural issues with comedy 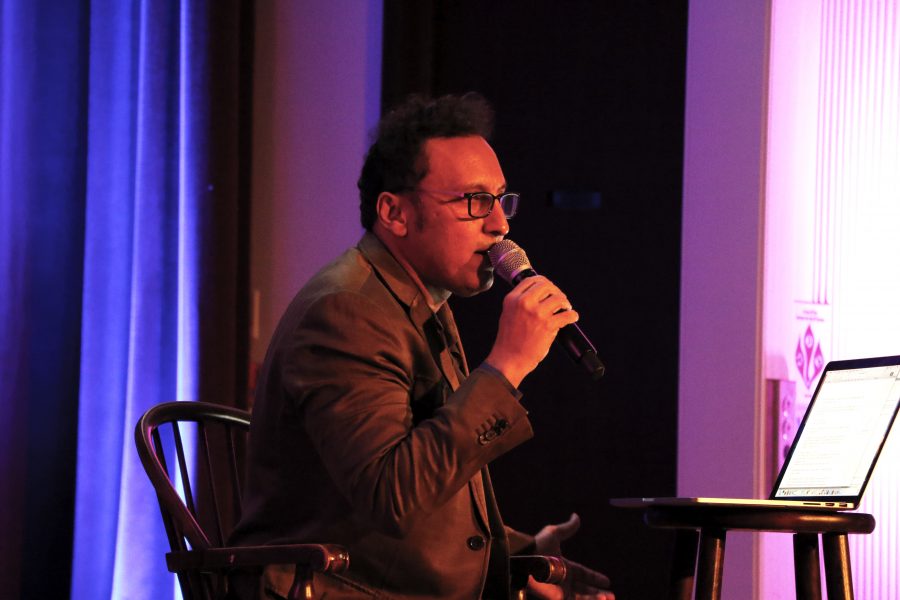 Aasif Mandvi knew he was crossing boundaries with his comedy during his show at the college. But, he said, the theater is a unique place where boundaries can be crossed safely.

“I think that hopefully, when you are watching someone do a performance, you are inside a safe space where there is an agreement made that we are going to go on a little adventure of laughter or tears,” Mandvi said. “I feel like that allows there to be a conversation or a performance that could maybe challenge or provoke things.”

An Indian-American comedian and satirist from a Muslim family, Mandvi discussed topics such as religion, politics and racism with students on Tuesday night. He was a regular correspondent on The Daily Show from 2006 to 2015, produced the web series “Halal in the Family” and authored the book “No Land’s Man.”

One of the main topics Mandvi touched upon and offered jokes about was the Islamophobia that exists in America. As a Muslim himself, Mandvi admitted that he made his career off of being “cheeky” about this issue.

“I have seen videos of people burning Quran and I think, well at least they are buying a Quran,” Mandvi said. “I try to look at it like that.”

Mandvi also discussed the concept of the micro-aggression, which he says a lot of students, and especially students of color, are talking about right now.

“A microaggression is like when someone asks your Asian friend if he knows your other Asian friend,” Mandvi said. “I grew up in the 70s in England and we had a thing called macroaggressions,” which Mandvi said would be outright bigotry and sometimes violently so.

At the end of his act, Mandvi told a story about his Indian-Muslim family wanting him to become a surgeon or a pilot. He, however, never took interest in those subjects and enjoyed English and Theatre much more.

“It would be inconceivable for them to think that I had no aptitude for science or math,” Mandvi said. “For Indian parents, saying that would be like we were a family of polar bears, and the parents [realized] their son was freezing.”

During the question and answer session that followed Mandvi’s performance, Indian-American student Nithya Sharma ‘20 related to this story by explaining how her parents want her to be a dentist, but she is studying Woman and Gender Studies and Psychology.

“I think he was a good person to bring to campus to help represent the Indian-Americans on campus, and he had funny anecdotal stories that we have all experienced as Indian-Americans,” Sharma said after the show.

Mandvi’s visit to campus was sponsored by the Lafayette Activities Forum (LAF), as well as Tapestries: Voices Within Contemporary Muslim Cultures.

Jane Feldmesser ’19, Director of Traditions for LAF, said the forum wished to bring Mandvi to campus to help open up dialogue on important subjects with a very broad audience.

“[LAF] has really been trying to get more politically engaged since that is the direction the campus is heading,” Feldmesser said. “We like to use humor to attract all kinds of students to our speakers.”

President of the Muslim Student Association Ayat Husseini ’20 said that figures like Mandvi are much needed in society.

“We need more people like him who are people of marginalized communities and are using their voices to change the way that we are viewed as people of color,” Husseini said. “I think he does a great job of doing that.”

“I realized that a lot of times people don’t think of comedy as something that is really important in our society, but I think a lot of the time we can use comedy to help talk about our culture and what is going on in our society,” Ryan said.

The comedian complimented students at his performance and commended them for their insights.

“There were so many good questions. This was a very thoughtful crowd. I was surprised because a lot of times I’ve gone to colleges, [it hasn’t been the same]. Compliments to your college, you’re a smart bunch of students,” Mandvi said.