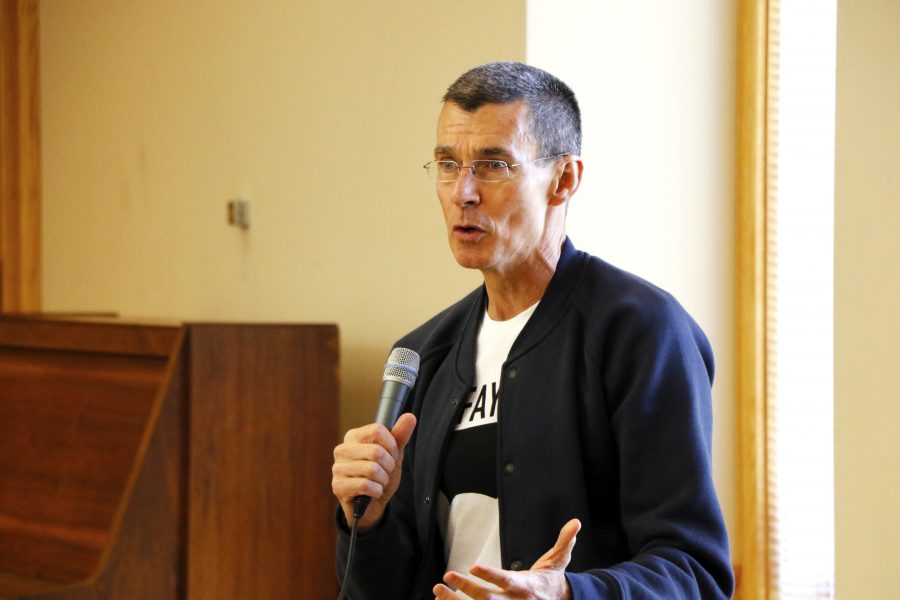 With a constant curiosity and a major in international affairs, both products of his time at Lafayette, one alumnus became the CEO of a international clothing company.

Chip Bergh ’79, CEO of Levi Strauss and Co., talked to students and faculty answering questions about both his time at Lafayette and his current career path this past Wednesday.

Bergh shared his success at Levi’s, and how he established a partnership between Google and Levi’s innovation teams to create what the Smithsonian Institute recognizes as the world’s first wearable technology: a bluetooth-accessible jacket. The Levi’s and Google teams have been working on this product for the past eighteen months with notable success, Bergh said.

The Levi’s Commuter x Google Jacquard Trucker Jacket is currently on sale for $350.

Bergh has had a long career in the consumer goods industry, most recently taking charge as the CEO of Levi Strauss and Co. in 2011. His visit was sponsored by the IDEAL Center for Innovation, and he spent much of his talk discussing what colleges can do to prepare students to become leading innovators and the nature of innovation in the business world.

“If you don’t innovate, you die,” he said. “Innovation is the recipe for success.”

At Lafayette, Bergh majored in international affairs, which he said was because “[I] couldn’t decide what I really wanted to major in, honestly.” However, Bergh said this decision was influenced by his desire to understand the world outside of the United States, and it has ultimately led him to the position he is in today.

Bergh also feels his intellectual curiosity was encouraged at Lafayette and continues to serve him throughout his career. “More than anything, what I took away from it was to have an intense curiosity about the world and to never stop learning,” Bergh said.

When asked if he had any particular management style or philosophy, Bergh said while he doesn’t have a set way of doing things, he focuses on maintaining transparency with his workers in order to build trust between them.

“I don’t know if I actually have a concrete philosophy on this, a lot of this is just years of experience and a little bit of intuition…what you see is what you get…even to a fault,” Bergh said.

While Bergh doesn’t have a particular leadership style, he has authored 10 Lessons on Leadership, where he discusses lessons and experiences he had in the army that helped him become a leader, both in war and in business.

This learned leadership and confidence was noticeable by members of the audience.

“[He] was well spoken and seemed comfortable with a microphone in hand. He was casual enough that I think the audience was comfortable, but it was also clear that he was knowledgeable,” Sam Klearman ‘21 said.

Bergh closed with a message to any student aspiring to make a career in the consumer goods industry, encouraging them to use their resources both online and at Lafayette to get their foot in the door. He added he tries to open up at least one internship position for any interested and qualified Lafayette student at Levi’s.