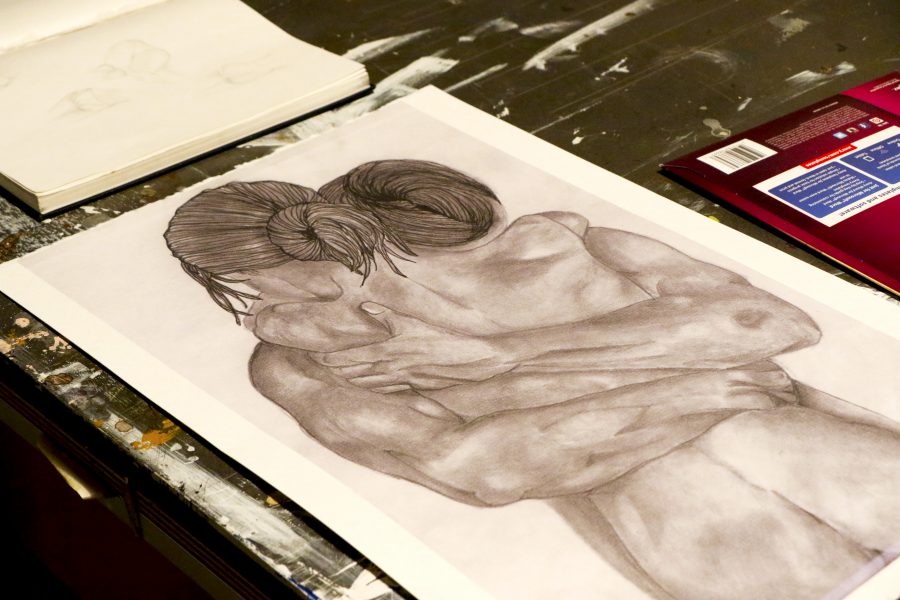 When Samantha Pastron ‘18 was in elementary school in Pasadena, Calif., art was incorporated into almost everything she did. At just five years old, Pastron had access to a state-of-the-art studio, photo labs, ceramics studios and all the supplies she could’ve dreamed. Now, her years of art culminate in her honors thesis project, inspired by an environmental impetus.

After planting the seeds into the paper, Pastron will put a wax cover over the picture so the roots grow down. She will plant the seeds on the negative space of the image so that the grass-like plant will grow into the picture.

According to Pastron, she drew her idea for the project partly from the environmental conditions of Los Angeles, which sits ten miles from her hometown.

“It’s crazy to be able to visibly see where there’s been a major change. [When I was growing up] there was a little bit of smog in L.A., but flying in you can’t even see the mountains when you land now. To visibly see that is just mind-blowing and it’s not easy to stop that, but I think it is easy to try and regrow, to do your part,” Pastron said, adding her project is a way that she can demonstrate the act of growing something.

Currently, Pastron is in the process of beginning to plant the seeds into her paper to see if the plant will grow properly. She is using seeds similar to those used in chia pets, which tend to grow faster than others, so the plant should grow in about two weeks, she said.

“Depending on the growing source I make, if it can hold one or two different pictures, I should hopefully be done by Christmas,” Pastron said.

Although Pastron is primarily a painter, drawing takes her back to her roots from grammar school, where creativity was encouraged in unlikely classes.

“In [elementary school] math class, we would make drawings about what we were learning about. In a science class, we would use silly putty or clay. We basically got to run wild with some structure. They would tell us what we can and can’t do and then say ‘go at it,’” Pastron said in an interview.

After being “grown into” art, as she put it, Pastron’s love for art translated into a college major. However, doing an honors thesis project was a last-minute decision, she said. Pastron approached art professor Ed Kerns about the project and gained his support two weeks into the semester.

In her time as an art student at the college, Pastron said she has enjoyed having a small community of art majors.

“I think that having such a small community, and having such access because of how small it is, is what has pushed me so far to where I am. Being able to sit down with my professors for hours and being able to work one-on-one with someone,” Pastron said.

After graduation, Pastron said she definitely wants to work with artists.

“I don’t feel the pressure to be an artist especially but I want to be in the realm where I get to work with galleries, curators, even designers and artists themselves,” Pastron said.

According to Pastron, her dream job would be to work as an art consultant.

“I’d get to travel the world, which I love to do. I would get to develop relationships with other artists, which would be a lifetime experience,” Pastron said.