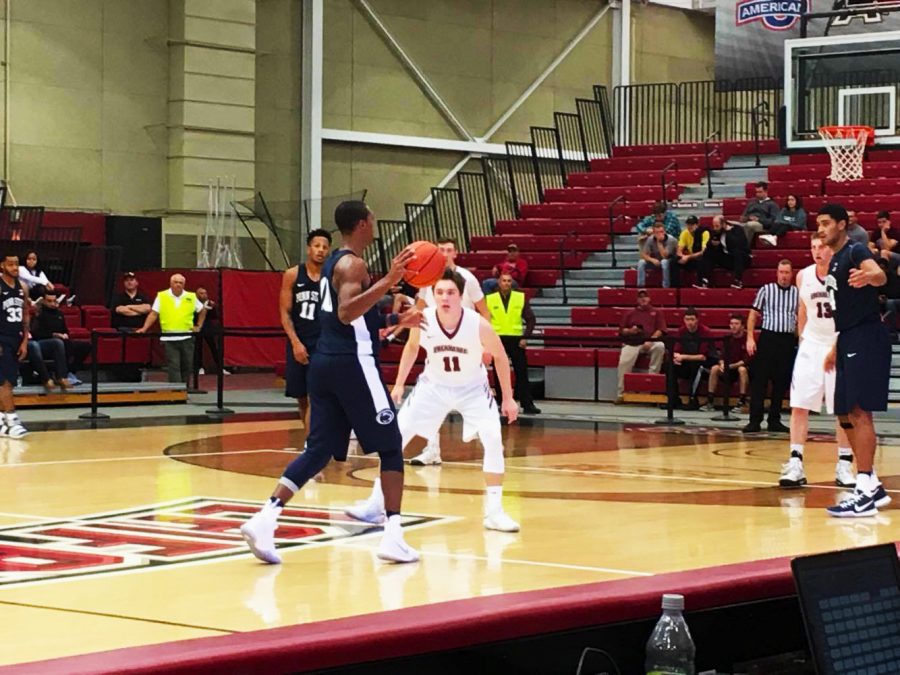 The men’s basketball team hosted Penn State on November 4 in an exhibition game, where they raised $7,000 for hurricane relief. The proceeds raised from donations and attendance fees at the 102-80 loss went to the One American Appeal, a foundation that is helping Texas, Florida and the Caribbean recover and rebuild from hurricanes Harvey, Irma and Maria.

“We planned the game a few weeks ago,” senior Eric Stafford said. “It was an opportunity to add another game to our schedule while also playing for charity.”

“It was for a great cause,” junior Auston Evans said. “We had the opportunity to play a game against good competition, but more importantly we worked for a good cause to help a large mass of people recover from a tragedy.”

Both teams have players who were affected by the hurricanes, including Lafayette sophomore Hunter Janacek from Houston, Tex. and freshman E.J. Stephens from Plantation, Fla. Penn State sophomore Grant Hazle from Kingwood, Tex., and freshman Jamari Wheeler from Live Oak, Fla. were also impacted by the hurricanes. Over 700 fans attended the charity game, with a $5 admission fee contributing to some of the fundraising total.

“We knew it was for a good cause, so we tried our best to get the word out and get as many people to come as possible,” Stafford said. “Hopefully if we do something similar in the future, we’ll get an even bigger turnout.”

“It’s cool that Division 1 NCAA teams can come together and actually make an impact on something like this,” Stafford said. “It was really cool to be a part of that.”

The Leopards begin their season on Nov. 10 at George Mason.

Disclaimer: Sports Editor AJ Traub ’20 is a manager of the men’s basketball team. He did not edit this article.