Why Lafayette will win the 153rd Lafayette vs. Lehigh rivalry game 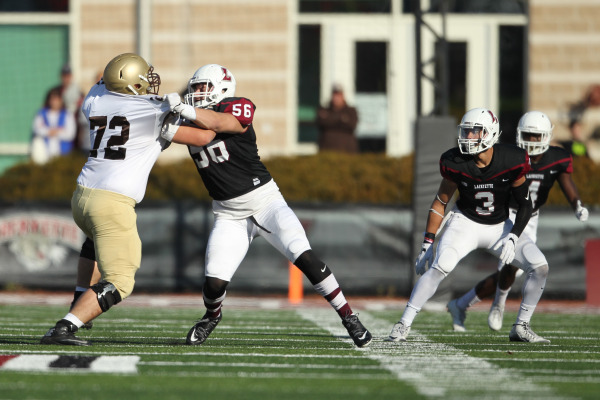 It’s the first taste of The Rivalry for Lafayette Leopards head coach John Garrett and freshman quarterback Sean O’Malley, and it’s also a chance for the Leopards to spoil the Lehigh Mountain Hawks’ playoff hopes. While Lehigh defeated the Colgate Raiders, their co-leader in the Patriot League, the Mountain Hawks must still consider this game a must-win as Colgate is headed to face the winless Georgetown Hoyas.

The Lehigh offense against Lafayette defense will be a thrill to watch. Lehigh’s offense has looked powerful this season, but it has yet to face the prolific defense of Lafayette. Senior DB Phil Parham has hauled in 7 interceptions this season. Senior LB Brandon Bryant was named to the Buck Buchanan Award Watch List for national defensive player of the year after winning Patriot League Defensive Player of the Week three times in a row.

Bryant and Parham are two leaders in a defensive unit that has been a dominating force. Five Leopards are over 50 tackles for the season. The team has picked off 15 passes and forced 10 fumbles, five of which they recovered. The defense has given up just 37 points total in five Patriot League match-ups.

In comparison, Lehigh’s defense has surrendered 160 points in their same five Patriot League matchups. The Fordham Rams could only muster 10 points against the Lafayette defense, but torched Lehigh for 45. The Leopards shut out Georgetown, but the Hoyas put up 35 against Lehigh. The Mountain Hawks have failed to hold any of their opponents under 20 points, which should be a great benefit to the struggling Leopards offense.

While Lafayette has yet to break out on offense, Garrett said after the Leopard’s low-scoring victory against the Hoyas that the pieces of the offense are close to coming together. The Lehigh defense is exactly what the doctor ordered. The Leopards have shown glimmers of brilliance throughout the season, with O’Malley throwing 50+ yard touchdown passes to junior WR Joey Chenoweth and senior WR Rocco Palumbo.

O’Malley’s abilities have not gone unnoticed, as he won Patriot League Rookie of the Week twice. Freshman RB Selwyn Simpson contributed to the recent development of the rushing game for Lafayette, as the team has worked towards a more multi-dimensional offense.

Garrett has a reserve of offensive weapons who are experienced in The Rivalry to utilize in the offense. Senior RB DeSean Brown has scored 4 touchdowns in the last two Lafayette vs. Lehigh meetings. Junior RB CJ Amill recorded a touchdown as well. Not to mention senior WR Matt Mrazek, whose career receiving yards place him in the top-10 in the Lafayette record books.

When the offense does fail to score, it has been freshman punter Michael Turk to the rescue. Turk is averaging 43 yards per punt, including 18 punts within the opposing 20-yard line. Lehigh punters are averaging 38 yards per punt, allowing for opponents to start with better field position. The Leopards can use this advantage to win the field position battle.

The game is not in the bag for either team, but Lafayette has the advantage of having nothing to lose in the standings. With the loss to Colgate, they cannot win the Patriot League. They can go out on the field knowing that the game is nothing more than a chance to remove their greatest rival from the top spot in the standings. That and everything listed above is why Lafayette will win The Rivalry’s 153rd installment.