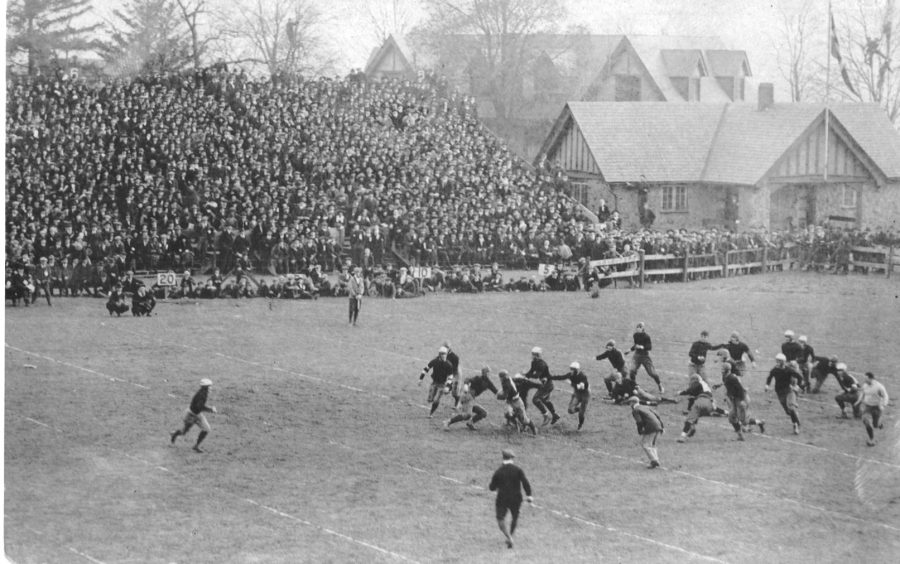 The rivalry game against Lehigh University at Lafayette in 1920. (Photo Courtesy of Lafayette Archives)

In 1884–the same year that Harry Truman was born, the cornerstone for the Statue of Liberty was laid and Mark Twain wrote the Adventures of Huckleberry Finn–Lafayette College and Lehigh University met for the first time to play football at the Easton Athletic Grounds, starting college football’s Most Played Rivalry.

One hundred and thirty-three years later, the teams are set to face each other for their 153rd game at Lehigh University’s Goodman Stadium on Saturday.

“What makes a great rivalry are more similarities than differences,” said John Leone, football analyst and sideline anchor for the past 20 years who also works in the development office. “We are close geographically, we are both proud of our academics, we both hav

e great engineering programs, and our size is relatively similar.”

The only year that the two teams didn’t play each other was in 1896 because of a dispute over the eligibility of Lafayette halfback George Barclay. Lehigh claimed Barclay previously played professional baseball because he had played for the Chambersburg semi-pro baseball team and therefore could not participate. The problem wasn’t resolved before the time they were scheduled to play, according to Director of Archives Diane Shaw.

“Barclay was a very good player so I think the Lehigh team didn’t want him on the field,” Shaw said. “The same year he caused the teams not play, he also invented the football helmet.”

Nicknamed “Rose” because of his status as a ladies’ man, Barclay wanted a way to prevent cauliflower ears. He decided to wear leather strips on the sides of his face, which was the first version of the football helmet. Since then, his head piece has been dramatically improved and made mandatory to wear by the NCAA.

Another story that Shaw said she finds meaningful took place during World War II when Lafayette, Lehigh and Rutgers University were known as the “Middle Three” because of a special arrangement among them to continue intercollegiate football during a time when few schools were able to play. The three schools organized a meet up at the Number Three Grosvenor Club for their alumni that were stationed in London, including 17 from Lafayette.

“They got together, shared a meal and watched a film of the 1942 Lafayette-Lehigh game that ended in a 7-7 tie,” Shaw said. “It was reported in the Stars and Stripes, the military magazine, on what it meant to these guys to come together during the middle of the war and have a brief respite. This anecdote really shows the power that the rivalry has.”

Fast-forward 72 years to the 150 rivalry game played at Yankee Stadium, which Leone said is a story within a story.

“We had to guarantee the Yankees that we could sell 30,000 tickets in order for them to let us play there and for us not to lose thousands and thousands of dollars,” Leone said. “Luckily, we sold 48,000 tickets in about two weeks.”

That weekend many festivities took place throughout New York City, including representatives of Lafayette and Lehigh ringing the closing bell of the stock exchange, students being interviewed on the Today Show and a Lafayette fundraising event at the Museum of National History.

“As I left I remember looking up at the Empire State Building and seeing it lit maroon and brown,” Leone said. “That was a very cool experience.”

“Being able to play in that game, in that kind of atmosphere, and win is still one of the best experiences I have had in my life,” Hinchen said.

The games are sometimes better known for the activities and pranks that occur leading up to them, during rivalry week.

“In the past, huge bonfires were lit on the quad, fraternity houses were decorated, and the sword attached to the Marquis de Lafayette was stolen by Lehigh students,” Shaw said. “I think the funniest prank was when Lafayette College students captured Lehigh students and shaved their hair into Ls.”

While rivalry events are less elaborate than in the past, school-sponsored celebrations and festivities still take place during the week leading up to the game.

“We kicked off rivalry week by decorating Farinon Student Center with balloons that spell ‘Beat Lehigh,’” said Elizabeth Passantino, who is the Lafayette Activities Forum member in charge of planning rivalry week. “We also hosted an Escape the Room, a pop up event with Lafayette-Lehigh themed desserts and giveaways, and co-sponsored with Recreation Services Casino Night.”

Many Lafayette and Lehigh students also adorned their houses with sheets that have clever slogans disparaging each other’s schools, such as “Lehigh built the mods,” and “Lehigh stole our banner but they still can’t read it.”

“This game is going to be especially interesting for the seniors because they have a chance to bookend their careers,” Leone said. “Their first game against Lehigh was probably the most monumental win for Lafayette in the rivalry’s history and now, after two years of losing, they have a chance to finish off strong and beat them again.”