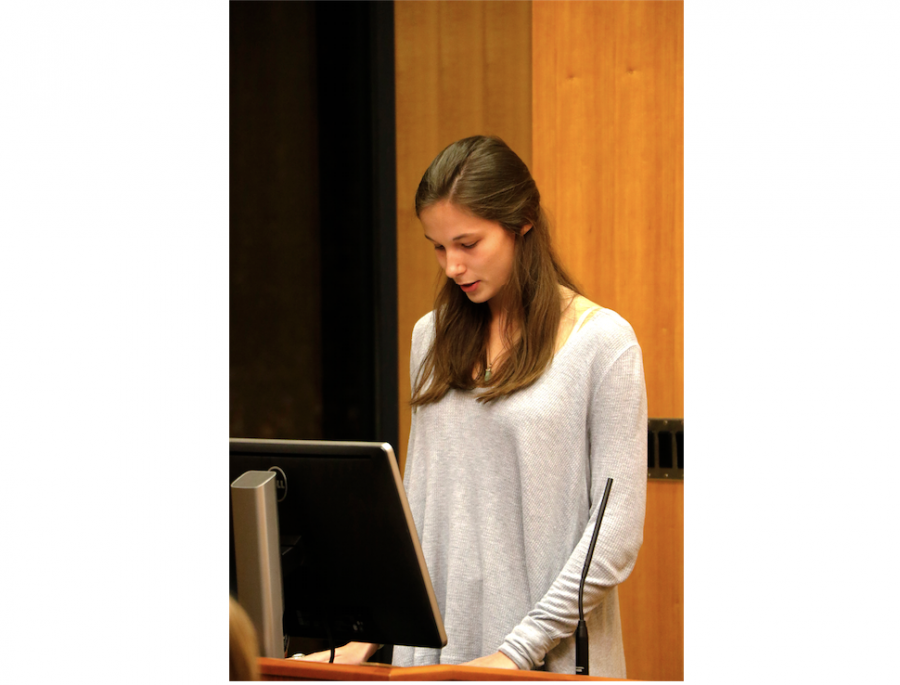 Sponsored by the English department, winners of the Flash Fiction Contest were invited to read their works alongside author of “The Mothers” and contest judge Jennifer Gilmore.

The winner of the competition, Krystyna Keller ‘21, won for her story “Backyard, 2004” and the two honorable mentions were Jennie Richardson ‘20 for “To Step Into the Sun” and Kaitlyn Hynes ‘18 for “Westminster.”

Gilmore’s novel “The Mothers” is about a couple who turn to adoption after years of unsuccessfully trying to get pregnant, and it is currently being adapted into a movie. Gilmore will teach an English course on Young Adult literature at the college next semester.

Before Gilmore read part of her novel, she said that the best part of the three winning stories were the endings.

“Were you not struck by the endings? The endings were amazing. So I always think, ‘Is it better to have a great beginning or a great ending’ because you can’t have both,” Gilmore said.

“Everybody who I picked had amazing endings. So, the endings were both expected but surprising. It wasn’t like, ‘and then she jumped out the window’, but it was something [about] the way the words matched with each other,” Gilmore said. “The endings really got me.”

Keller’s “Backyard, 2004” is about the stories and the backyard she grew up in.

“I kind of live on a farm and we only have a couple of horses, but when I was little, one of the horses that just recently passed away was buried in one of the fields, and I used to always bring him flowers to put on his grave. So, [it’s about that] and the stories I grew up with and the settings I grew up on,” Keller said.

According to Keller, she wrote the story while sitting in her AP English class in her senior year of high school.

Keller said that sharing her story was “kind of scary” but that it was nice because it reminded her of home and she had the support of her friends.

“Usually I write about what I imagine and that has always been fun for me, but this summer I decided to start writing about what I know. [A lot of Brandon’s experiences] are rooted in my own, so it was really cool to kind of see that line between mine and his and what I want for this character and what is for me,” Richardson said.

“‘Westminster’ was my attempt to capture some of the feelings of unease that I felt at some points of my abroad experience and still feel today,” Hynes wrote in an email.

Hynes said that it is difficult to live without fear.

“I’m not saying that we should stop living our lives normally. We cannot live in fear, but I think what I was trying to say with “Westminster” was that it’s difficult to live completely without fear during these difficult times. And this was the first time that I had really come face to face with this,” Hynes said.

Gilmore expressed that, as an author herself, she knows how vulnerable it is to share your work.

“It’s nice to be able to recognize people who are so talented. And I know, having been on the other side of it so many times …. how vulnerable we are when sending our works out,” Gilmore says.

“I was so nervous. But sharing your work is such a personal thing, it is always going to be nerve wrecking. It was a really great audience so I’m happy I got to do it for the [Lafayette] community,” said Richardson.