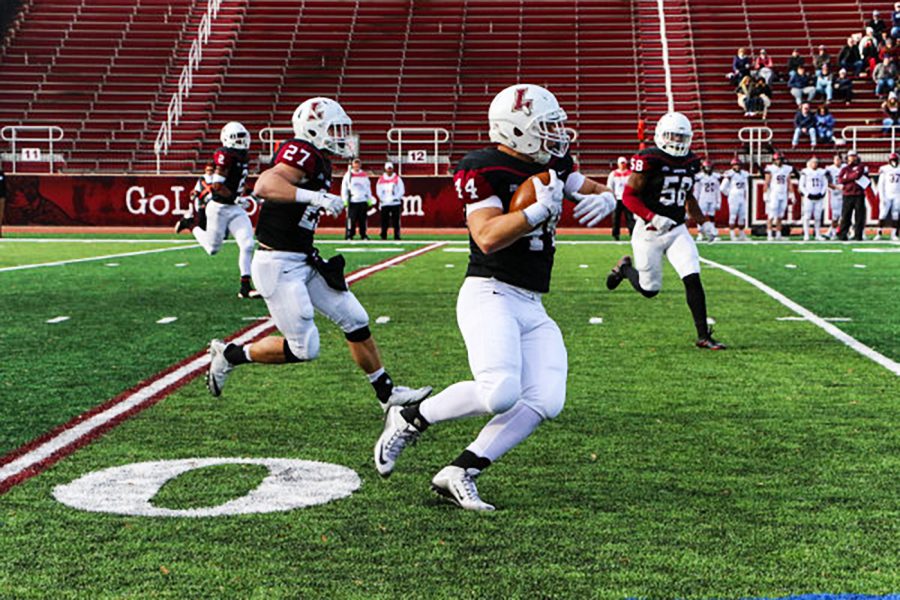 With a 27-0 home loss to the Colgate Raiders, the Leopards were officially eliminated from the FCS (Football Championship Subdivision) playoffs. Lafayette falls to 3-2 in the Patriot League, right behind Colgate and Lehigh (4-1).

Lafayette can still finish tied for first in the league if they beat Lehigh and Colgate loses this weekend, but cannot move onto the playoffs due to their previous loss to Colgate.

After a scoreless first quarter for both teams during the Nov. 11 game, Colgate struck with a 17-yard rushing touchdown and a 1-yard quarterback scramble touchdown. The running game was all the Raiders were able to get going on Saturday.

“I was really proud of how our team competed defensively to make them earn every yard they got and to not give up big plays,” head coach John Garrett said. “[I] was really pleased how [they] made it hard for the Colgate offense to score.”

Colgate put the game away in the third quarter with a pair of field goals and a pick-six on a tipped pass by Leopards freshman quarterback Sean O’Malley. The tipped pass and a trick play run by Colgate was the difference in taking the Leopards out of it.

“Their trick play and then the interception for a touchdown is two scores, and other than that, the game is right there in the balance,” Garrett said.

Whether or not Colgate converted on those two plays, the Leopards offense could not find the endzone.

“Offensively, I liked how our guys competed and drove the ball,” Garrett said. “We just didn’t finish drives.”

“We construct a game plan to see what’s the best way to move the ball,” Garrett said. “It’s typically a combination of running it and throwing it. There were some formations where we thought [we would] get some runs, and we did. We were able to pop a couple early and gain some yards, but then the game started to turn a little and we had to throw it more because we were behind.”

Despite the final score, the Colgate offense was far from cruising. The Leopards defense forced three turnovers and sacked Raiders quarterback Grant Breneman three times, holding him to five completions on the day.

Senior DB Phil Parham intercepted Breneman for his 7th of the year, and sophomore DL Demetrius Breedlove completed the other two turnovers with an interception and a fumble recovery.

“[We] made it really hard for them to advance the ball,” Garrett said. “Even though they had a lot of rushing yards, it was really because of a lot of attempts. We really limited a lot of long runs. They didn’t get many. Passing, [they got] hardly any significant passing yards at all.”

“[Breneman] only completed five of 17 passes, so our defense really made them one-dimensional because we got pressure on their quarterback when they decided to throw it and I thought our secondary linebackers really did a good job of covering their guys. There weren’t many open receivers. They made them earn everything,” he added.

Lafayette finishes the season on Nov. 18 in Bethlehem in the annual Rivalry game against Lehigh. The Leopards face a chance to knock Lehigh out of their bid for the postseason with a win at Goodman Stadium.