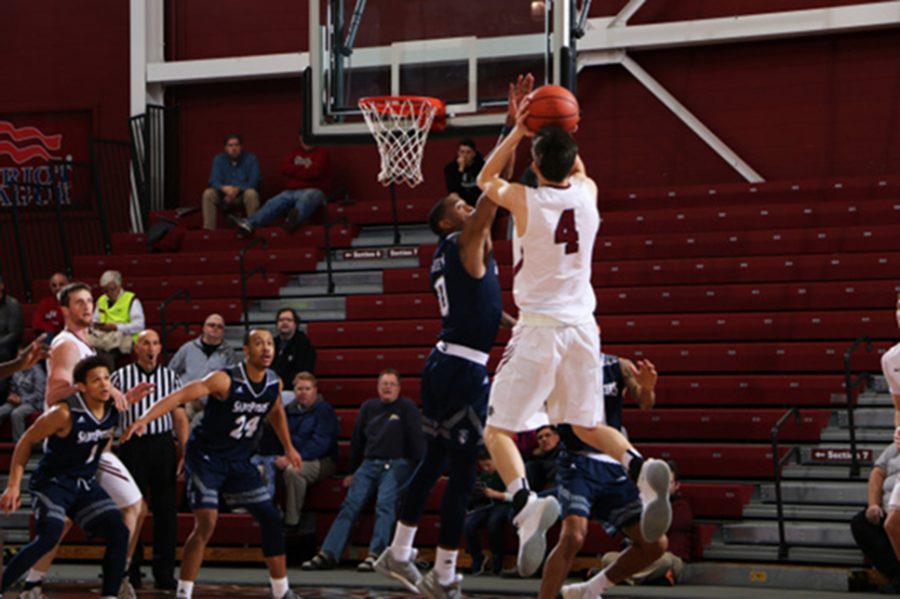 The men’s basketball team faced off against the St. Peter’s Peacocks in their first regular season home game on Nov. 26. After a string of losses to start the season, the Leopards were looking to earn their first win in front of a home crowd, but the team walked away empty handed in an 86-82 loss. The defeat brings them to 0-6 on the season.

Guard Alex Petrie put up 25 points, the most by a Lafayette freshman in one game since Lafayette joined the Patriot League in 1986, the league’s founding year. Forward senior Matt Klinewski and Petrie combined for 55 of the Leopards’ points, with Petrie hitting a late 3-pointer to draw the Leopards within two. The Peacock’s Alex Griffin went six-for-six from the line in the last 30 seconds of the game.

“I was just trying to give our team a chance to win, but they hit all of their free throws,” Petrie said after the game.

Klinewski said he thanked his teammates for their confidence in him, and Petrie discussed some of the shortcomings of his game.

“I think I could have done better rebounding and defensively,” Petrie said. “I shot well, but we still lost so it wasn’t good enough.”

Klinewski scored 30 points in a game for the first time this season, after doing so four times last season. Over the course of the season so far, Klinewski and Petrie lead the team in 3-pointers shooting 66.7% on 18 shots and 48.5% on 33 shots, respectively.

Petrie said he doesn’t let his rookie status deter him from playing his best.

“I don’t really view myself as a freshman,” Petrie said. “Coach puts me out there, and I can’t play like a freshman. I’m just a basketball player.”

Lafayette put up a strong scoring game against the Peacocks, going 25 for 44 (56.8%) from the field and 14 for 26 (53.8%) from three. Despite their shooting percentage, Lafayette had 17 turnovers and lost the offensive rebounding advantage 12-2.

“They had a lot of guards who crashed the boards hard,” Klinewski said. “We have to do a better job of boxing out and keeping their guys off the boards. When it comes to that, it comes down to heart. You just have to want it more.”

Offensive rebounds have been a weak point for the team, as they garnered 26 in five regular season games, while their opponents pulled down almost 50 boards.