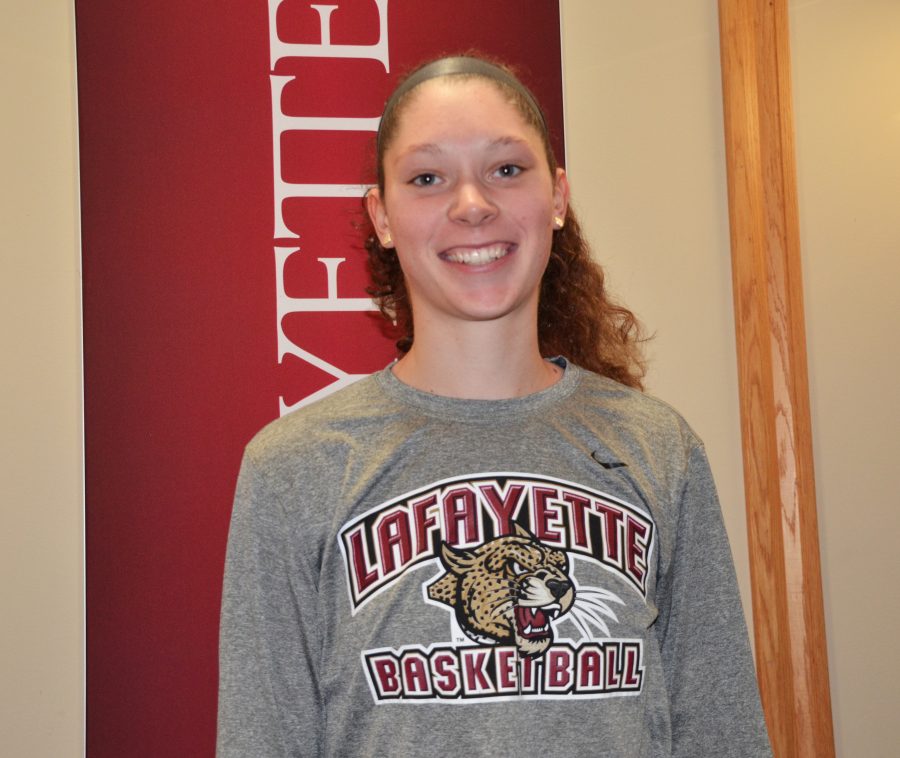 This week, The Lafayette sits down with women’s basketball’s leader in points and rebounds, freshman forward Natalie Kucowski.

AJ Traub: What changes did the team make that led to the victories against Rider and LIU Brooklyn after starting 0-3?

Natalie Kucowski: After losing our first three games, we didn’t let it get to us. We were always looking forward to the next game. We wanted to play the way we knew we could. Playing together and executing our offense. Certain games we wanted to work on different things, such as rebounding and boxing out or taking care of the ball on offense.

NK: For us, it’s just keeping our energy up and not letting it die after one quarter. It’s communicating on defense, which has helped us with our rotations. At the same time, settling into our offense and getting good shots each possession.

AT: You’ve grabbed 27 offensive rebounds. How have you developed your game to extend so many offensive possessions?

NK: As a post group, we really work on getting around our defender and to the basket to get as many second chance opportunities as possible. It’s just being aggressive on offense and getting as many rebounds as possible.

AT: You lead the team in points and rebounds. How have you performed so well so early into your college career?

NK: Each game I’m not focused on scoring a certain amount of points or being the leading scorer on the team, it’s just a matter of taking opportunities when they present themselves. It’s also attacking the boards and making sure we share the ball with our teammates.

AT: How has the experience been, transitioning from high school to college basketball?

NK: From a transition standpoint from high school to college, it’s a very big transition, not just the physicality but also in your level of awareness, especially on defense. For me, that’s probably the biggest adjustment.

AT: You earned Patriot League Rookie of the Week after your first two games. What were your thoughts after getting the award?

NK: I was very surprised, and it was a great honor to get that. Just because you get it once doesn’t mean you can just stop working hard. We haven’t even started our conference play yet. As a team after the first few games, you could see the improvements we were making together and it was a matter of continuing to improve each game after that.

AT: Why did you choose Lafayette as your school and basketball team for your college career?

NK: Academically, I wanted to attend a school that had a strong academic program. I want to major in engineering, so that continued to narrow down the schools. From a basketball standpoint, when I got to meet the team for the first time, it was a very welcoming experience. Spending a lot of time together, we’ve gotten a lot closer and that has carried over into our games.

AT: Do you or does your team have a motto?

NK: The word we use to define our team is “strong.” We thought it could carry over into different aspects of the game, whether it’s being strong with the ball or being strong mentally.

AT: What has been your favorite team moment so far, on or off the court?

NK: There’s been a lot, but I think after our first game against Rider, the energy in the locker room was amazing. We realized how well we can work together to keep having the same success.

AT: When did you start playing basketball?

NK: I believe probably at the age of five or six. Just the recreational leagues in my neighborhood.

AT: What is your favorite pro basketball team?

NK: I’m from Philly, so right now that would be the 76ers.

AT: Do you trust the process?

NK: I do trust the process. You can see the process already. It’s coming.

NK: I’ve always liked Serena Williams, and just watching her dominate the game that she loves to play.

NK: I love all kinds of food. I really don’t have a favorite.

NK: I play two instruments. I play the piano and the clarinet.