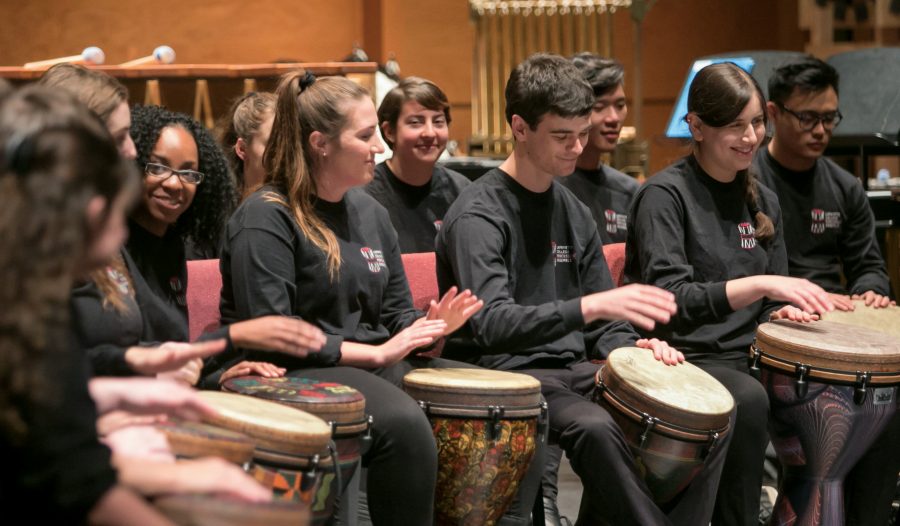 If you were on campus Monday night, it was possible you heard the resounding booms of a bass marimba nicknamed “Big Bertha” or the lively chimes of George Hamilton Green’s “Ragtime Robin” on xylophone ringing out from the Williams Center for the Arts.

The concert encompassed a wide variety of genres, with influences ranging from Asia to South America to Europe. The performance incorporated many diverse implements of percussion including boomwhackers, which are thin plastic tubes of varying lengths measured so as to produce specific notes when hit against a surface, the surface in this case being chairs.

Rousing euphonies and smooth transitions were the themes of the night. Kicking off with all forty-two members on stage, master drummer Sean Gorman ’18 led the group in a thunderous djembe drum progression which he composed. From there followed a series of smaller groups performances, which had anywhere from three to five people. Eventually, however, the performance looped back to include the entire ensemble.

Notable pieces in the show included “Ragtime Robin,” a pretty xylophone number led by Matt Ackerman ’18, “Skokiana,” a fourteen-person, big band-style blaster originating in Zimbabwe and “Three Brothers,” featuring soloists Sean Gorman ’18, Eric Last ’20 and Jacob Miller ’20. There was also a brief moment of audience interaction when the crowd was instructed to jingle their keys and clap their hands and bodies in time for a combination performance of “Jingle Bells.”

Interspersed within the instrument changes, Stockton entertained the audience with jokes and tidbits about the ensemble, such as its substantial diversity: six countries, seven states and twenty different majors are represented. According to Stockton, the ensemble has swelled in size since last year, going from about 20 to 42 members.

“I have a lot of experience with him [and] he’s just such a funny guy. He really knows how to manage his students well, and everything he does is because he cares so much about his students,” Last said.

The ensemble closed the concert Monday with an fantastic rendition of the classic “Hana Shonu,” a piece originally intended to drive evil spirits away, in which the entire ensemble came forth once more to deliver on an array of different drums.

Overall, this performance by the college’s percussion ensemble exceeded expectations. If you didn’t get the chance to see the performance in person, the Monday concert and several past concerts can be found on the Lafayette College Percussion Ensemble’s YouTube channel.