Feeling the force on the Quad 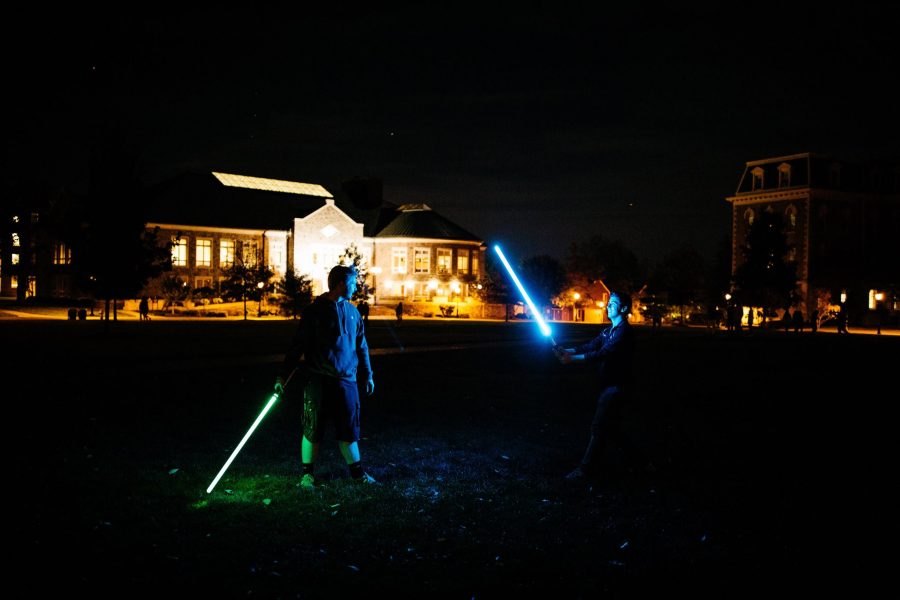 In their free time, some students watch Netflix, read, play video games or hang out in their dorm rooms. For Dan Goodman ‘20 and Jared Conner ‘20, free time is for lightsaber duels on the Quad.

The two said they often get people stopping by their duels asking to join or watch.

“The most interesting part that I’ve found is that if you were to talk about Star Wars around campus, people would be like, ‘What are they doing? They’re so nerdy’, but the minute we bring the [sabers] out and they see it, they get that kind of childish side of them brought out and they’re so into it, which is awesome,” Goodman said.

Goodman and Conner said the dueling began last year when Conner introduced Goodman to his collection of sabers. While Conner had a love for fighting with sabers since he was young, Goodman is relatively new to the activity.

“Eventually [Goodman] just came to my room, saw my newest saber, and he was like ‘I’m gonna get one now,’ so he got one and that’s when it really kicked off. I went out with my friends last year a couple times and [Goodman] came out maybe once or twice,” Conner said.

While the dueling started out as just something to do for fun, Goodman said he has been in the works of turning the activity into a potential art project. Goodman said he is interested in taking long-exposure photos of the lightsaber fights and turning them into a picture setup. Goodman hopes to get the funds for the project through the CaPA Scholar Program, which has recently opened up so that any students can apply, he said.

According to Conner, the duo will begin looking into fighting ‘forms’ that would look good for Goodman’s photos.

Conner and Goodman said there are very few rules to their fights.

“It’s more just play fighting really. So, we kind of abide by fencing rules where if you get a hit, you kind of stop, but most times we just keep going with it,” Goodman said.

The sabers, which are made primarily out of aluminum and a special plastic, range vastly in price, Conner said. With seven sabers in his collection and an eighth on the way, Conner added that the sabers are priced anywhere from $100 to $450 and sometimes higher. Goodman, however, recently bought his first saber in September and is still in the learning process.

“Apart from just being good at fighting, [Conner] has martial arts experience, so he actually knows what he’s doing, whereas I’m kind of learning as we go. The joke between us has been that my knuckles from holding the saber have been bruised for the past like, 3 months, just because holding it, you get whacked so many times. But it’s worth it, it’s so much fun,” Goodman said.

According to Goodman and Conner, who meet about twice a week to duel, the two have been discussing the idea of creating a club. However, according to Goodman, starting the club could be costly because the cheapest sabers are still relatively expensive.

Conner said he has big aspirations for the sabering craze.

“Personally I’ve always had the dream that at a Laf-Lehigh game, everyone from Lehigh and everyone from Lafayette gets one and after the football game, everyone rushes the field and starts dueling last man standing-style. I think that would be awesome, but highly unlikely,” Conner said.

Corresponding correction: Dan Goodman ’20 has been nominated by a faculty member and accepted into the CaPA program, applications for CaPA are only open to incoming freshmen.