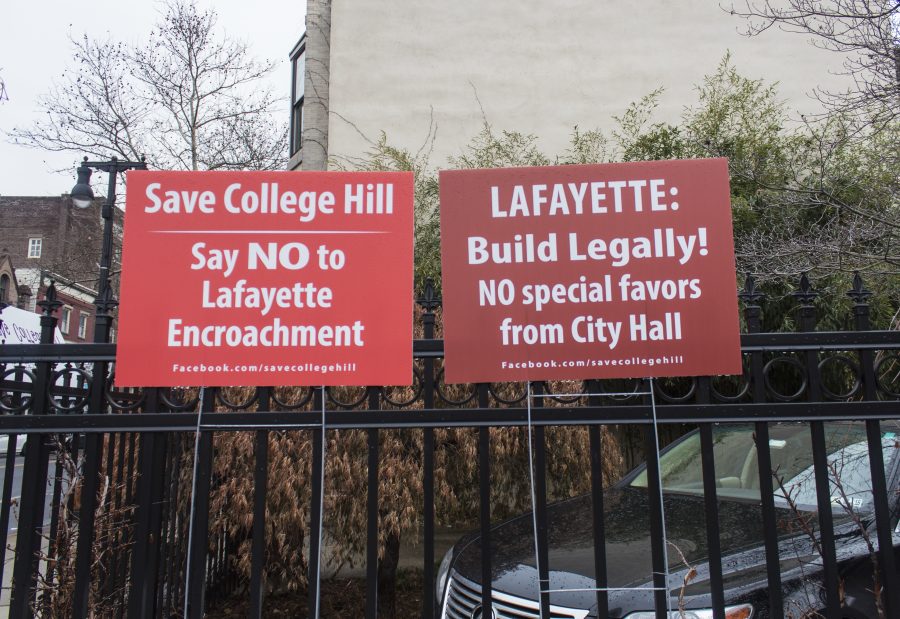 This summer, College Hill residents filed a procedural appeal against the city’s acceptance of the zoning changes (Photo by Elle Cox '21).

Earlier this month, Easton Mayor Sal Panto and City Council affirmed their support for the Lafayette expansion project, and Panto said he was working on writing ordinances to clarify some of the issues that the Easton Planning Commission identified with the McCartney dorm project.

The college originally planned to open the new dorms for fall of 2019, but community concern about the project and the plans has complicated the timeline.

“It’s getting a little bit longer in the approval process than we anticipated,” Vice President of Finance Roger Demareski said. “We’re working with the office of campus life and residence life to see how we could adjust some beds, we have lots of options in terms of housing, so it’s not going to stop or slow the expansion, but like any plan, you have a plan and you need to be flexible and adjust, and we’ve got plenty of options.”

“[Panto] and the city council have been amazingly supportive,” Demareski said.

“They believe that the laws that they changed in April should have allowed this project to move forward, so they directed their planning staff to draft a series of ordinance changes to really clarify some of the issues that the planning commission identified, so that was a big step for the city really announcing that,” Demareski added.

Some of the zoning ordinances Panto is working on include “banning residential parking permits for any student living in college provided housing,” the Morning Call reported. The college would also need to provide a shuttle from the Bushkill lot, where they plan to relegate the requisite parking spots, to the planned dorms.

Despite consistent pushback from College Hill residents about the project, Panto has voiced his approval of the college’s expansion and feels the college’s presence in Easton is just as important as when it was founded.

“Lafayette was founded by Easton residents who saw the value of having a first class liberal arts college in the town.  Like most of our residents, I see the same value today. Also, I believe the city created the Transitional Zone along McCartney Street for this very purpose and use,” Panto wrote in an email.

Those seeking to prevent the current proposed expansion only comprise a small minority of Easton’s 28,000 residents, Panto wrote. Additionally, “the vast majority of the opponents don’t even live near the college and are not impacted by this project,” he added.

Panto also wrote that those residents he’s spoken with on the subject “see the positive value of the expansion and the contribution to the overall economic base it will add to the city.”

Mar. 8 will be the first public hearing since the ordinances have been written, and Demareski said residents will again have the opportunity to voice their comments publicly.

Panto wrote that he feels Lafayette has a significant presence in the Easton community as both the city’s largest employer and taxpayer.

Additionally, Panto wrote “Lafayette adds to the educational and cultural value by affording our residents the ability to use their facilities like the library; attend events like lectures, shows, athletic events or just jogging or walking through the beautiful campus and so much more.”

Despite benefits the college may bring the community, opposition has persisted throughout the project. One group opposed to the expansion called “Save College Hill,” led by Lafayette professor and city planner Paul Felder, doesn’t seek to block Lafayette’s expansion entirely.  According to Felder, they “just want it done legally and in a way that will be best for all parties.” In Felder’s opinion, Lafayette’s current plans fit neither of these criteria.

Felder said the project is currently in contention with several laws surrounding “context sensitive design,” which state that new buildings must be relative in scale to any buildings they replace. In addition, Felder claimed that the current plans violate laws relating to historic preservation and would result in the destruction of 11 historical sites in the McCartney site.

Regarding the alleged illegality of the proposed zoning changes, Panto stated that relevant ordinances are “fluid and change for a variety of reasons.”