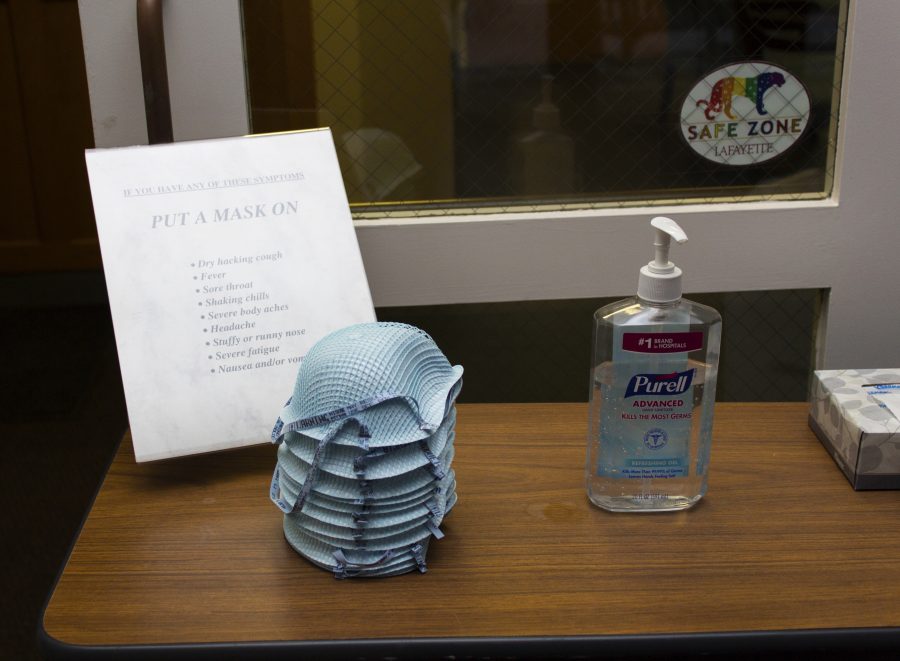 With nearly 48,000 reported cases of the flu in Pennsylvania this year, and 2,343 in Northampton County alone, Lafayette has been fighting to keep the epidemic from spreading across campus.

According to the U.S. Centers for Disease Control, nearly 15,000 people have been hospitalized with influenza since the start of the flu season. Over 50 children have died from the flu or flu-related complications.

On college campuses where illnesses spread quickly, extra precaution is taken to prevent the outbreak of illness, and the college has been preparing for increased numbers of cases.

Director of Health Services Dr. Jeffery Goldstein anticipates this year’s flu season at ending a little later than usual due to the severity, and that Lafayette’s peak is probably a few weeks out.

“I anticipate the next couple of weeks will be pretty challenging for the college and we’ll see increasingly larger number of cases this week and next week. I think we’ll reach our peak in about two weeks and then we’ll start to tail off,” Goldstein said. “That’s my prediction, whether it will come true that’s another story. Having gone through a bunch of epidemics on campus I have a sense of how it will roll.”

“So far the community has done remarkably well compared to the community outside Lafayette College, and the Lehigh Valley is getting hit exceptionally hard. The hospitals are really firing on all cylinders to keep up with the patients that are rolling in with influenza,” Goldstein said.

“That being said our caseload for influenza has been pretty low to moderate,” he added. According to Goldstein, there hasn’t been a case at the school severe enough to warrant hospitalization.

What has contributed to this “low to moderate” outbreak on campus? Goldstein believes there are two factors potentially contributing to this good news: students and staff taking safety precautions and getting vaccinated, or,  more simply, just luck.

“Typically when we offer flu shots in the fall semester we get about 15-20 percent of students come in. What we’re seeing now is really an unprecedented number, 20 students a day coming in for flu shots. That’s something I’ve never seen in all my years here. Students are taking it seriously and trying to get vaccinated, as they should because the vaccine can still be of benefit,” Goldstein said.

The American College Health Association recommends a 70 percent vaccination rate for college campuses, however, on average, only about 8-39 percent of students tend to be vaccinated.

As the college doesn’t require vaccinations, they have taken other precautions in public places, dining halls and residence halls.

“During January [Resident Advisor] training, we reviewed the information Dr. Goldstein had just sent out to the campus.  The RA’s covered this information during their community meetings the first week of classes and hung the Fight the Flu posters in the halls,” Associate Dean of Students Grace Reynolds wrote in an email.

Buffet-style dining halls such as Upper Farinon and Marquis have an updated protocol. For the time being, most self-serve stations have been altered so only the dining staff is serving food. Additionally, students are being encouraged to participate in the “Flu Buddy Program” in which they can get to-go meal boxes from Upper Farinon and “flu buddy bags” from Lower Farinon to bring to sick friends.

However, the most effective way to prevent spreading the flu is to avoid contact if feeling ill. In an email sent out to the campus community on Wednesday, the Bailey’s Health Center emphasized most the importance of staying out of public if you are experiencing symptoms.

“I anticipate that the next couple of weeks will be challenging, and I want to encourage everyone to remain vigilant. Students are encouraged not to attend class, meetings, and events if they are sick with the flu,” Goldstein wrote in his letter.