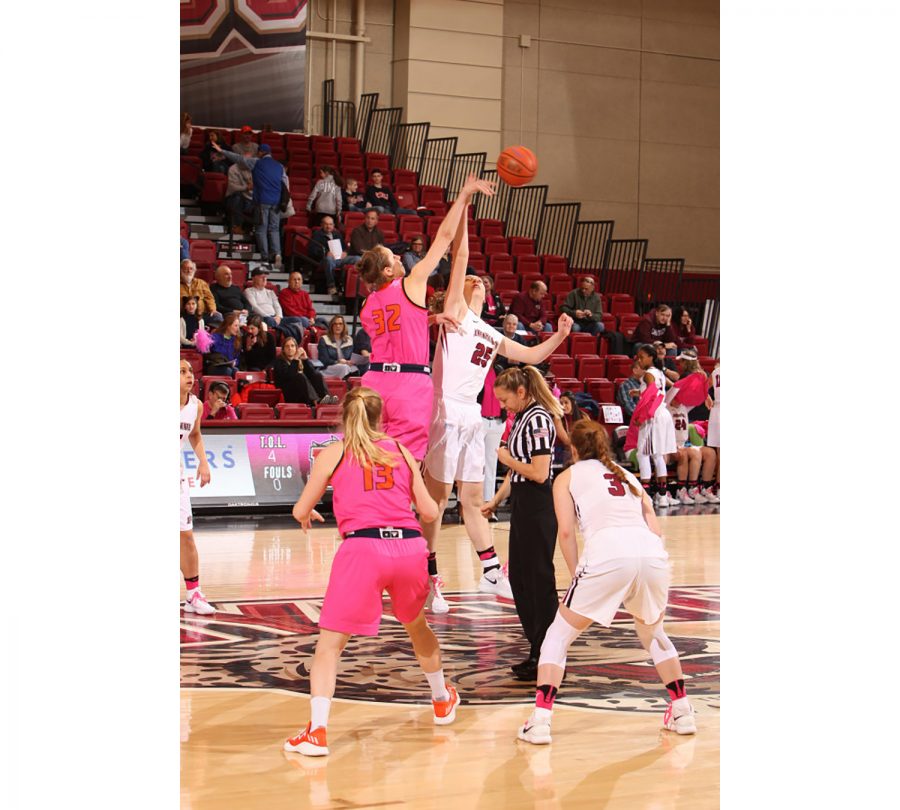 The women's basketball team is participating in the Play4Kay Free Throw Challenge for the entire month of February. Photo Courtesy of Athletic Communications

The Lafayette women’s basketball team began their annual effort to raise money to fight breast cancer last Saturday in the Play4Kay event. Five Leopards were featured in a video during the game discussing how the disease has impacted their life. Freshman guard and forward Olivia Martino, whose cousin died of breast cancer, spoke in the video about the importance of regular check-ups.

“It is very important to go get checked out, because you never know what can happen,” Martino said in the video.

The proceeds from the event went to the Kay Yow Cancer Fund, a foundation created in 2007 by The Women’s Basketball Coaches Association, The V Foundation for Cancer Research and former NC state women’s basketball coach Kay Yow, who died of stage IV Breast Cancer in 2009. The team will continue raising money through the Play4Kay free throw challenge, whereby they donate a certain amount of money for the month of February for each free throw they make. Lafayette’s team has raised $350 of their $2500 goal so far.

The foundation works to improve and extend the lives of women battling Cancer and to raise money for Cancer treatment and research. The Play4Kay cause aims to bring together women’s basketball teams and communities across the nation to help raise awareness of Breast Cancer.

“We created encouraging posters that would be displayed around the gym at the game, and we also made a video that included some of us stating what Play4Kay means to us,” Martino said. “A few of us have been affected by Breast Cancer within our families, so this game meant a lot.”

At the event, five Breast Cancer survivors remained on the team’s bench during the game, and participated in musical chairs during one of the timeouts.

“We wanted to make sure that they felt special and celebrated for their strength, courage and fight for their lives,” Martino said. “We also warmed up with Play4Kay t-shirts, and wore pink socks along with pink shoe laces.”

“[Kay Yow] has encouraged me to continue to cherish life, and have courage no matter what,” Martino added. “There are many women out here in this world fighting for their lives, and taking life for granted should never be an option. I’m very blessed to have life, and not have to worry about fighting for it in the way others have to.”