CEO and engineer speaks to value of liberal arts education 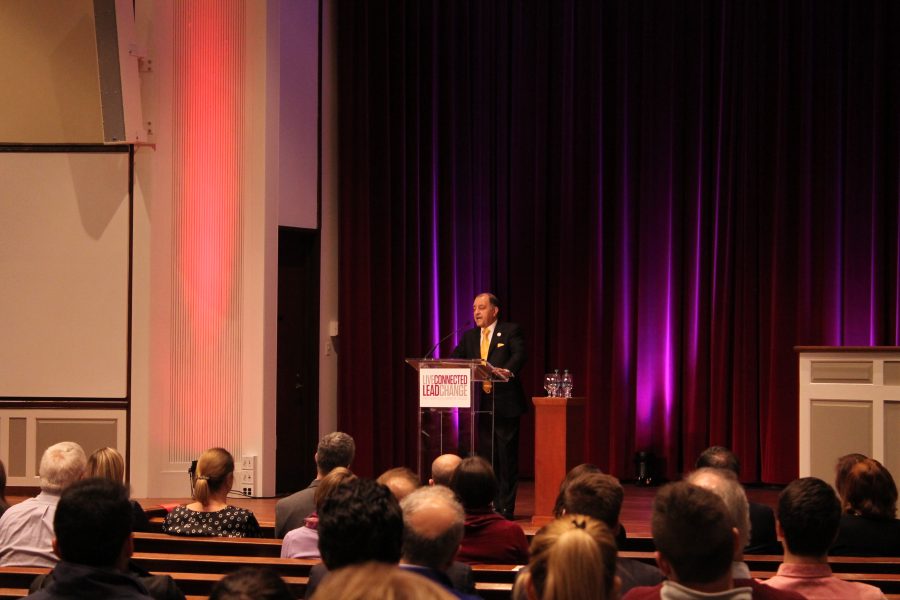 Seifi Ghasemi believes classic literature and all aspects of a comprehensive liberal arts education are fundamental for every student in their future career goals.

Ghasemi, who is the chairman, president and CEO of Air Products, said he believes so much in the value of an interdisciplinary education that he decided to help Lafayette facilitate the partnership of engineering and the liberal arts through the creation a new endowed chair position in the engineering department. The $1.5 million from Air Products, $500,000 from Ghasemi and a $1 million match from an anonymous donor will support the new professorship.

The new professorship was announced Monday night during Ghasemi’s lecture, “Engineering and Liberal Arts Education: A Winning Combination.” Ghasemi, who received an honorary degree from Lafayette in 2017, discussed his educational experiences studying both engineering and the humanities.

After managing various businesses after his college years, Ghasemi said he found that “a solid and comprehensive education in liberal arts is a great foundation for whatever career you want to pursue.” Ghasemi himself earned his undergraduate degree from Abadan Institute of Technology in Iran and went on to receive his M.S. degree in mechanical engineering from Stanford University.

While Ghasemi majored in engineering, he attributes his liberal arts education to his success, especially when he was in his first job out of college when his boss wanted to design a steam auto-driven race car.

“My task was to have a boiler which would generate enough steam to drive a 750 horsepower steam engine. It was an almost impossible task. All of the conventional designs didn’t work. I wondered, how do I address this problem?” Ghasemi said.

It was at this technical crossroads that Ghasemi employed his humanities-based way of thinking to the seemingly unsolvable problem.

“I started approaching the problem that way. I ended up coming with ways to solve the problem and [got] a pattern. I had to focus on non-standard thinking. Where did I learn this? At school. How? By studying philosophy and learning about people who have developed innovative things,” Ghasemi said. “This was my first advantage of studying humanities.”

Ghasemi said its this ability to recognize opportunities and move in unexpected directions that demonstrates the importance of an interdisciplinary education.

“As my own career has developed, I could clearly see benefits of having an intensive education in liberal arts,” he said.

After his talk, Ghasemi was asked several questions from students about being creative, responsible and successful in the business world.

One student asked Ghasemi about the importance of entrepreneurship and innovation at his current company, Air Products.

“We’re not [a] kind of company like Apple,” Ghaesmi responded. “Our focus is, ‘How do you take fundamental molecules and use them in way that produces product that people will benefit from?’”

He added that within this company, entrepreneurship is key, as every individual has the responsibility of thinking of ways to constantly improve things the company is already doing in order increase efficiency.

Ghasemi said being genuine is the greatest asset in being a manager.

“People are smart and will figure out if you’re making a speech on the latest management book. You have to really believe in what you’re saying. You need to have a plan and be able to articulate [that] plan to people and explain it. If you don’t understand, you’ll never be able to win.”