“Disgraced” highlights the complexity of Muslim identities in America 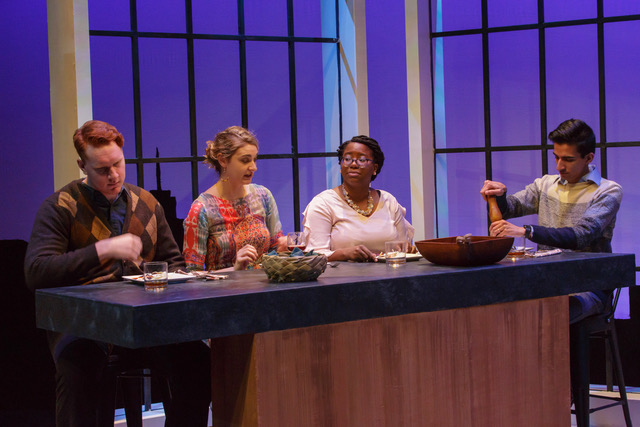 “Disgraced” is charged with the complexity of being Muslim identified in America.

The play explores topics like interracial marriage, gender roles, loss of one’s own identity, racial profiling of Muslims and people of color, the appropriation of Muslim culture and art by white Americans and contains discussions of 9/11.

Director of the play and theater professor Suzanne Westfall said that America refuses to recognize that the majority of terrorists are not men of color, but white middle-class males.

“I just think that we misidentify terrorists by looking at the color of their skin, or making assumptions of who they are and our country is inordinately bad at seeing its own people as the terrorists they are,” she said.

“They’d much prefer to find someone who is marginalized or othered or not middle-class male white Americans … all of the shootings we’ve had, they’re not by Muslims, they’re not by brown people, they’re by home-grown, right-wing white racists and I really object to the word terrorists being thrown around in the wrong direction,” she added.

She said that the scene of the dinner party is called “the dinner party from hell” when the cast is rehearsing because it calls out aspects of these characters’ identities.

Religious studies professor Youshaa Patel set “Disgraced” as a required play for his classes because of the conversation that the play explores.

“The play itself, I think it’s a fantasy meditation on Muslim American identity and the struggles that many Muslims endure and reconciling the elements of being American and what it means to be Muslim. I think the play does a fantastic job [at] bringing all these features and dimensions,” he said.

Patel said that “Disgraced” is a timely play in terms of the light that it brings to conversations.

“I think [disgraced] is certainly timely….in many ways to what it does bring to light, you know, conversations about the place of Muslims in American society,” he said.

He said some may find the play controversial.

“Some people may take issue with the play, I mean it’s controversial play.” Adding, “There is a scene in which…the main character seems to conform to a certain stereotype of angry Muslim males…so then the question becomes: is it the author’s [or] the playwright’s responsibility to create characters that deviate from the stereotypes that we may have?”

The play consists of two different cast members. The wardrobe of the two cast members are entirely different.

Westfall wrote on her Director’s note that the play is played by two different casts.

“And since the play requires a small cast, I was able for the first time to double-cast, so that audiences may see two completely different interpretations by two sets of actors,” she wrote.

Emma Krebs ’20, who plays the artist Emily, believes that the play touches on conversations that Lafayette’s campus needs to have.

“I think a lot of people will be able to identify with this character. I’m thinking from Emily’s perspective, this white woman who basically fetishizes Islam and Islamic art for her own gain,” she said.

“I think that’s something that this campus, in particular, needs to think about. Like taking people of color’s stories and making it their own for their own benefit, which I think occurs quite a lot,” she added. “I think it should start a good discussion.”