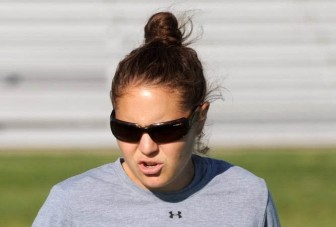 Expectations are running high as the Lafayette field hockey team has repeat on its mind under new leadership. Jennifer Stone ’04, who has been an assistant coach for the past six years under Andrew Griffiths, now takes on a new role as head coach.

Still an active field hockey player at the US high performance training centers, Stone has the unique opportunity to use her current experiences within the sport to make her a better coach.

“When you participate, you are always going to learn new things,” Stone said, “[Playing now] definitely helps me as a coach.”

It also helps that Coach Stone has a strong passion for field hockey.

“I enjoy the sport, [especially] lessons learned through the sport,” Stone said. “It is great when you can make a career out of your passion.”

Even with that rare experience of coaching and playing at the same time, it would be natural for Stone to feel the weight of taking over this team. The field hockey team is one of the most successful programs at Lafayette. The Leopards have been in the Patriot League finals for five out of the last six years, winning titles in 2011 and 2012.

Taking over a team with back-to-back championship trophies, however, has not rattled Stone. She insists that she feels no added pressure this season.

“I was pretty involved as an assistant,” Stone said, “Now I just sit in a different seat.”

Stone attributes the ease of this change to the team.

“The girls are really supportive – that is the fortunate thing about leading the program I have already been a part of,” Stone said.

Senior Kelsey Gula agrees that Stone’s promotion from assistant coach to head coach has been natural.

“The transition has been a rather smooth one since we were familiar with Jennifer previously as an assistant coach,” Gula said. “We all respect her and were confident from day one that she would and will lead our team to success as a head coach. The team has put its full faith in her coaching abilities and strive to improve each and every day.”

Asked what would change, if at all, Stone replied, “The core values are the same. The delivery is just going to be different. I give a slightly different spin.”

That change in “delivery” includes a stronger commitment to creating an environment that is extremely positive, while being both demanding and competitive. She wants to instill the importance of hard work, fitness, dedication and sacrifice into all of her players. Stone is working with the team to give them a “level of resiliency” necessary for the girls to continue to succeed as they try this season for a third-consecutive Patriot League Championship.