A new face for an old system 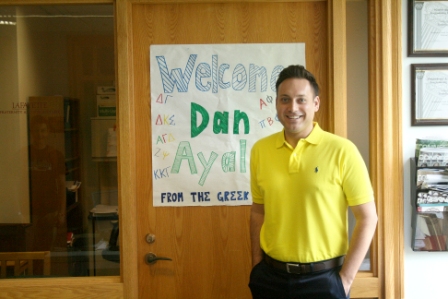 Photo by Nicole Maselli ‘14 | The Lafayette

After Director of Fraternity and Sorority Life Stuart Umberger resigned this past June, Lafayette College searched for his replacement.

The newest Lafayette employee who worked an inhumane 96 hours his second week on the job? Meet Daniel Ayala, the Assistant Director of Residence Life and advisor to fraternities and sororities.

When most new hires would typically still be learning names and figuring out where the office coffee maker is, Ayala immediately jumped into coordinating fall recruitment, Greek life’s largest event of the year.

Ayala was born and raised in Iowa. He had a well-rounded four years at Northwest Missouri State University: he served on Student Government, planned programming with the Hispanic American Leadership Organization, worked as a Resident Advisor and founded the school’s chapter of the Phi Delta Theta fraternity. All along, he’d been planning to work in a field that reflected his majors: political science and Spanish.

But as a senior, he had a “lightbulb” moment.

“Wait a minute–there’s a natural fit here [in residence life and Greek life leadership] for me to have a career,” Ayala recalled.

He graduated in 2003 and completed a masters program in higher education at the University of South Carolina. His “number one takeaway from grad school” is one that he’s planning on utilizing in the upcoming months: learning to hang back and become accustomed to a place before charging in and making drastic changes.

There are small changes Ayala is planning on making for the recruitment period next year, to ensure the process runs smoothly. But if there are going to be “big-picture changes, they will come from the ground up,”–students initiating the process and Ayala helping to facilitate that.

Armed with a master’s degree, Ayala moved to Southern Michigan. He worked as the Assistant Director of Residence and Greek Life at Adrian College, a small liberal arts college of about 1,700 students. There, he was the resident staff advisor in a sorority residential building, and worked closely with the school’s five fraternities and four sororities.

After nearly two years at Adrian, Ayala moved into the nonprofit world. Working with the scholastics and ethics-promoting Golden Key International Honour Society, based out of Atlanta, Ayala traveled the U.S. working to develop and maintain Golden Key chapters. He worked in various associate director positions for five years before the position at Lafayette opened.

Joining Lafayette’s Greek community in its recent time of controversy and change is a tricky business, but Ayala’s transition seems to be a good one.

“I felt like there was more presence from Dan [than Stuart]; like he came to the house every day before the events started to check in with us–just quick, like two minutes. But it was nice to see him to do that because it felt like he really cared and that he really wanted to get right into the Greek culture here,” an upperclassman sorority member, who wished to remain anonymous, said.

“I think he will do a terrific job,” President Alison Byerly said regarding Ayala. “I just met with the Alumni Interfraternity and Sorority Board and I think they’re interested in working with him. I think they feel good about that.”

Ayala is looking forward to fulfilling his goals here: educational programming for both Greek and non-Greek students, which are co-sponsored with other departments and offices, leadership development and risk management work, addressing gender and sexuality issues, and helping to develop an inclusive campus community.