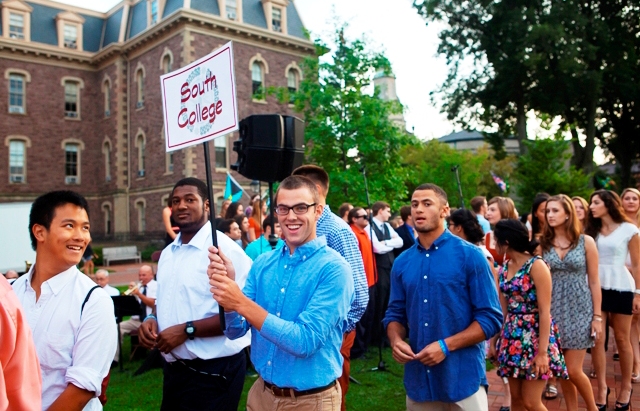 The incoming class of students holds the distinction of being the most diverse in Lafayette’s history.

The heralded Class of 2017 saw not only a spike in number of applicants and enrollments from its preceding year, but also a jump in global and racial diversity. The incoming class shattered some previous records in campus makeup.

Forty-five percent are from outside of New York, New Jersey, and Pennsylvania, which is about a 20 percent drop from the Class of 2014. Ten percent of the class consists of international students, double the percentage of international students in the Class of 2016, and holding citizenship in 17 new countries, including Kenya, Mexico, India, and the UK.

Dean of Admissions Greg MacDonald attributes the rise in diversity to increased involvement in the admissions process by the current Lafayette community.

“Our recent success is a manifestation of us welcoming more people into our recruitment,” MacDonald said. “Alums are doing more interviews for us than they have in the past; our current students are taking on a larger role in the [Lafayette College] Ambassador Program; we have seniors who are senior interviewers now…we’ve increased our diversity in this class by increasing the diversity within our selection process by asking faculty, alumni, and current students to be involved in more meaningful ways.”

That’s not the only reason different types of students are applying to Lafayette: it has to do with the number of states and countries the admissions department visits over a typical school year.

Some international students, though, say that their application process for Lafayette was more by their own involvement, utilizing admissions resources that had already existed.

“I had a counselor in 11th grade,” Tamar Jakeli ‘17 said. Tamar is Lafayette’s first student from the country of Georgia, and she spent her senior year of high school as an exchange student in Colorado. “[My counselor] had graduated from Hamilton College, which is also a liberal arts college, and he advised me to look at liberal arts colleges. I went to U.S. News & World Report rankings, and Lafayette was one of the top 50 colleges.”

“I went on every website of every college in the top 50, and Lafayette was one of the universities that really interested me…I applied to seven other U.S. schools,” Jakeli said.

Lafayette’s future in the international market looks rewarding. “We have five staff members visiting 25 countries this fall,” MacDonald wrote in an email. “Lafayette is regarded among the top small colleges in the world, and our recruiting efforts need to match that fact.”