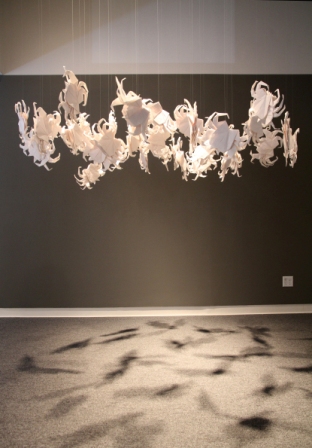 Photo by Hana Ishihara ‘17| The Lafayette

Origami, or the Japanese art of paper folding, has been traditionally thought of as an art form. The new exhibit at the Williams Center for the Arts, Crease, Fold, and Bend, shows a slightly modified version of this definition.

Having acquired an eclectic collection of origami-inspired projects, Crease, Fold, and Bend seeks to showcase origami as a practical means for solving everyday problems, serves as means of propaganda, and even delves into the world of mathematics. This exhibition is not the glorification of simple animalistic representations but rather the medium of exploration into an ingenious art.

Some highlights of the exhibition include Robert Lang’s environmental awareness project, which amalgamates traditional animalistic representations with anatomy and a subtle message hidden inside each of his creations. Lang, who is recognized as one of the foremost origami artists in the world, is a pioneer in computational origami, which uses computers to study the mathematical laws that apply to folding. He uses this technique to develop formal design algorithms for folding as well.

Being an environmentalist, Lang decided to utilize origami as a medium through which he can educate the public about the consequences of ignoring the care of the environment and animals. In each of his works, he prints a “skeleton” of an animal of his choice onto transparent paper, and folds it in order to create the skeletal representation of that animal. In addition, he includes an object that is hidden in each origami figure to represent the dangers of littering. Objects include cigarette butts, hooks, and syringes.

Crease, Fold, and Bend also features Carlos Runcie-Tanaka, an artist of Japanese and Peruvian descent. He formed an origami-inspired monument to preserve the memory of his grandfathers and symbolize the multi-ethnic background of his family. A collection of 36 paper folded crabs hangs from the ceiling to represent the 36 years in which his grandfathers lived before their premature deaths.

“The crabs have become a symbol for me of the meeting point between land and sea, of issues of migration, cultural identity, and adaptation,” Runcie-Tanaka said.

Erik and Martin Demaine, a father-son team from the Massachusetts Institute of Technology, use origami to understand mathematical algorithms necessary to fold paper into any shape one desires. Recently, they have been exploring curved creases, an origami technique which remains poorly understood mathematically, but has potential applications to robotics, deployable structures, manufacturing, and self-assembly.

In one of their pieces, the Demaines defy preconceived beliefs that curved creases are virtually impossible. This three-dimensional folded figure has no straight lines, with only a series of curved and coiled structures intertwined within each other. The entire structure is circular and arched.

These talented artists create beautiful and perplexing shapes and folds, objects, and animals, but origami is also being used worldwide as a practical means of solving problems and making discoveries. Crease, Fold, and Bend proves that origami is as much a mathematic concept as it is an art form.