Lalla Essaydi speaks on feminism, gender and race through her art 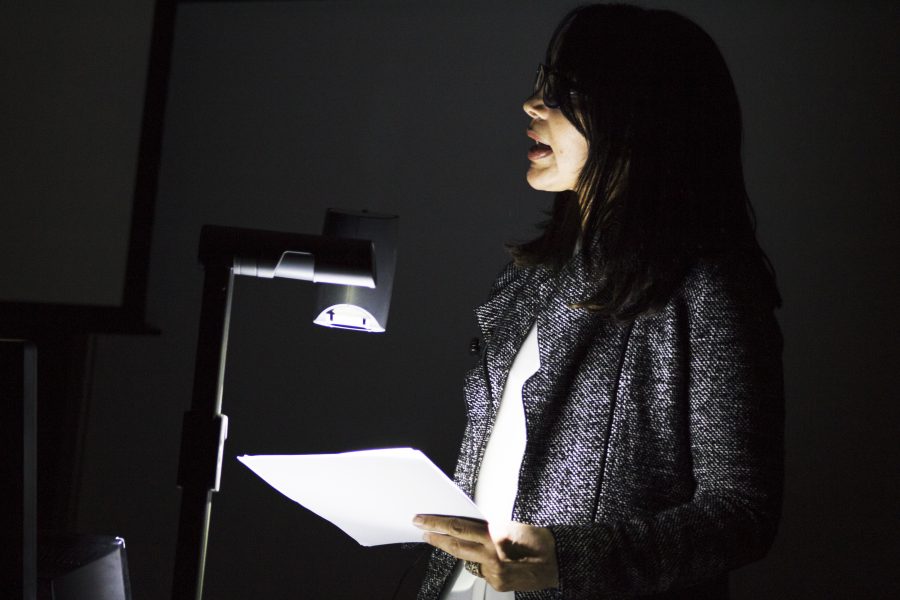 It took world-renowned artist Lalla Essaydi six months to a year to create her art.

Her art consists of creating textiles, scripted fabric, and bullet garbs. She adorned the female models for her photographs with henna, a traditional body dye used in Morocco where it is associated with femininity.

Essaydi was born in the U.S. but spent most of her childhood in her family home in Marrakesh, Morocco. She attended school in Paris before living in Saudi Arabia.

She hopes to engage with centuries of Islamic art and heritage from a different perspective, particularly that of a female Muslim artist who has lived in both the Eastern and Western sides of the world.

Through her photographs, Essaydi said she aims to directly converse with “Oriental” imagery, and undermine the distorted and degrading view some hold of the Eastern way of life, particularly that of Arab women.

Through her travels and diverse background, Essaydi said she became aware of how these places view each other. She also found out about the Western gaze, which involves the perpetuation of “Orientalist” tropes such as over-sexualization of Arab women worldwide and in popular media and political analysis.

According to Essaydi, these paintings satisfied the Western man’s desire for fantasizing about foreign women who are sexually robust.

Essaydi said that meanwhile, Arab men were represented quite differently, often being colored as brutal and unattractive.

“The effect is to emasculate Eastern men, and challenge the traditional values of honor and family,” she said.

Although Essaydi notes that the veil can be a statement of feminism in certain cases, it generally serves to cut women off from the public sphere and keep their voice from being heard. She said that complete veils and beards were not a common sight in Morocco until recently.

Essaydi said that gender oppression is not about piety–it’s about preventing women’s active interactions in the public sector, and their right to own property. She added that women today are experiencing varying degrees of tyranny all over the Arab world, and some regimes hide it better than others.

“My relationship to the orientalist tradition is a complicated one,” she said.

She sees it both as very beautiful, with almost loving detail, yet she cringes at the portrayal of Arab women and the demeaning and distorted imagery. However, Essaydi said she is not trying to play the blame game, but merely “to liberate Western and Arab viewers alike from the grips of these assumptions.”

Another omnipresent theme is Essaydi’s work is that of spaces.

“Women’s sexuality in the Arab world is determined by the very nature of public and private space.” Essaydi said that the overall system as well as the fact that within the culture any time a man enters a space it becomes a public space.

In her photography, Essaydi attempts to take back the spaces previously reserved to men and to reverse the patterns of habitation defined by the culture. She returns again and again to the idea of the spaces of her childhood competing with those spaces which she inhabits now as an artist. This juxtaposition of cultural mixing provides her with a powerful platform to speak to both worlds.

“[I] always carry [my] old house within me, but my new life had added dimensions.” In some of her newest pieces she situates her subjects not in any particular house in Morocco but in imaginative space.

“Ultimately I wish for my work to be as visually present yet as elusive as a woman herself. Not because she is veiled or turned away, but because she is still in progress,” she said.

Her work is displayed in the Williams Center until April 7.