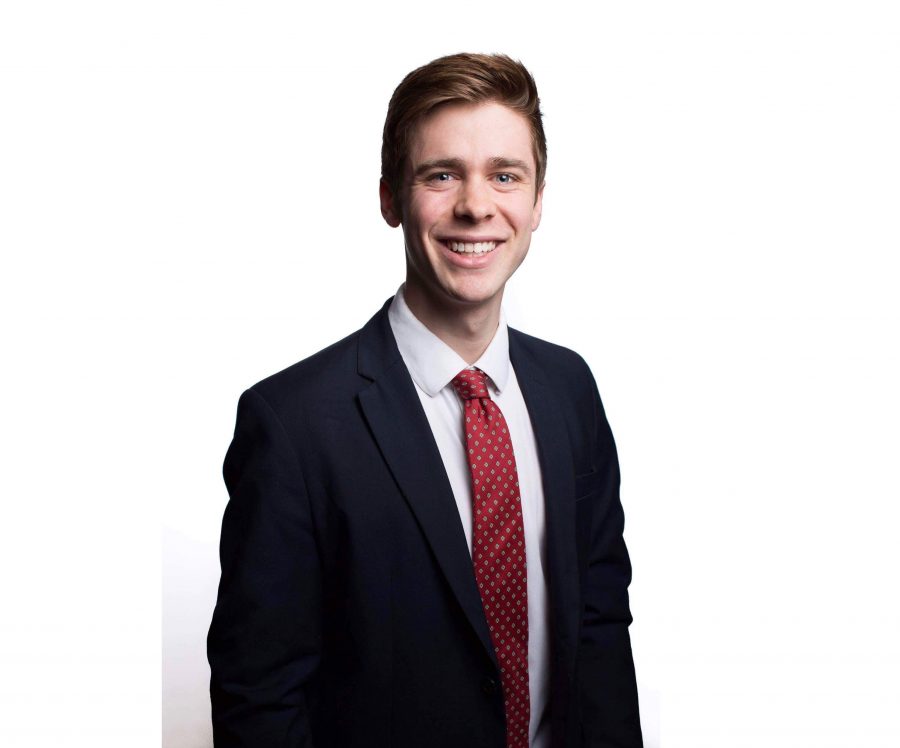 Connor Burwell ’19 was elected president of Lafayette College Student Government for the 2018-2019 academic year last week, winning 46 percent of the vote of 1088 votes total. Burwell will focus his presidency on implementing the new structure of student government and addressing concerns of students expressed in a recent student government survey from last semester.

Burwell is entering his presidency in time of great change for student government, as the group voted for vast structural changes this year to be implemented next year. The new structure involves changing the term duration from a calendar year term to an academic year term, which is why Burwell was able to run while he abroad this semester.

Previously, he has served student government as the Chair of Student Organizations and then Executive Secretary. Burwell also ran an unsuccessful bid for the presidency last year but was not discouraged from running again this year.

In addition to his other positions, Burwell was also a member of several ad-hoc committees including the committee that helped restructure student government.

“[I] helped push through some of the big structural changes we’re going to see like going from 15 to 36 members, adding a few committees and a few other changes as well,” Burwell said.

Burwell foresees these changes as being challenging but also an opportunity for growth.

“One of the reasons I was involved in making the changes happen is that I think a lot of time and energy is wasted on [student government] right now, and I don’t think we harness the people’s capacities to the best of our ability,” he said.

“But by having an increased number of people, I think we’re going to make joining StuGov more accessible. So we’re going to see more ideas, we’re going to have more energy, more passion behind the ideas we pursue and we’re going to be able to really divide up some of the work more equitably, so that people can really dive in and do their part,” Burwell added.

Burwell’s presidency will also be influenced by the results of a survey sent out at the end of last semester regarding the effectiveness of Student Government.

The results of that survey led Burwell to two major takeaways: students aren’t aware of what is going on within student government and campus took note of the Ad Hoc Committee on Ensuring Inclusive Dialogue.

Burwell isn’t too concerned with making sure students are constantly aware of what is going on but wants to ensure that they see they results of student government’s work.

“So getting people to know about it isn’t the end goal, but it’s hosting more initiatives, it’s providing more support for student organizations so that people do know about us because they’re benefitting. Not just knowing about us to know about us,” Burwell said.

As for the Ad Hoc Committee on Ensuring Inclusive Dialogue, Burwell had issues with how the committee was put together and the effects it had on marginalized communities on Lafayette’s campus.

He particularly heard “critiques from some of the most marginalized communities at Lafayette towards that committee and how it may have sort of been making life worse for them.”

“I think that’s a legitimate critique and so that was not a committee that I was involved in making happen and not something that I want to pick up again this year,” Burwell said.

“I think there’s a lot that StuGov could learn from the way that that happened, like how we should be advocating for people in the community,” he added.

The voter turnout for the election from the student body was 43 percent. Saeed Malami ’20 and Andrew Frucht ’20 earned 37 percent and 15 percent of the vote, respectively.

Current president Bilal Akbar ’18 was pleased with voter participation this election, which was two percent higher than last year’s election.

“I’m happy about the turnout we had. I have to admit I was worried about turnout because we decided to keep the polls open for less than a day under the hypothesis that students would be more excited to vote in a contracted polling period,” Akbar wrote in an email.

Aside from addressing the new structure and student survey responses, Burwell is also looking forward to implementing a new rubric for clubs to help allocate funds. Burwell said he feels that in the past it’s been difficult for student government to determine the value of clubs.

With this new rubric, clubs will grade themselves and hopefully provide helpful information for student government to use when determining funding. Burwell also thinks student government needs to provide better training for new executive members of clubs, if those clubs themselves don’t already have smooth transitions.

Akbar said he feels Burwell will be successful in his role and in his efforts in transitioning student government as a whole.

“I am excited to see where Connor leads Student Government next year. I think he is qualified and prepared for the job, especially because the biggest task ahead for Student Government is ensuring a successful transition to the new structure,” Akbar wrote.