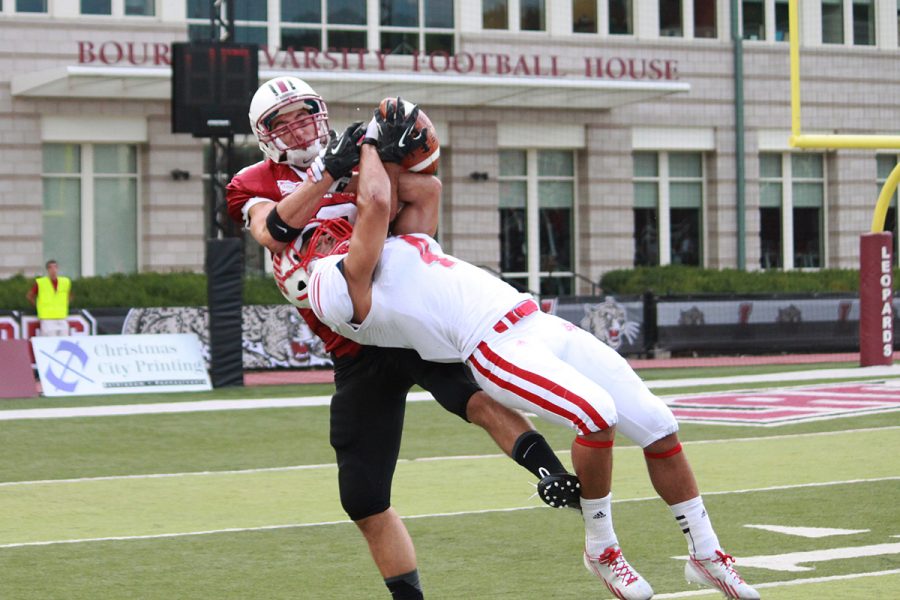 Lafayette football opened its season in dramatic, nailbiting fashion. Sacred Heart’s Alec Finney ‘17 converted a 42-yard field goal as time expired for the go-ahead points in a 26-24 victory against the Leopards tonight at Fisher Field. It was Finney’s first career field goal attempt and came without any warm up kicks prior to the game.

The heartbreaker came after Lafayette running back Ross Scheuerman ‘15 ran 12 yards for a touchdown with 2:02 remaining to put the Leopards ahead.  The Pioneers staged a 2-minute, 11-play, 54-yard drive that ended with the kick just barely clearing the uprights as the clock struck triple zeros.

On that final drive, Leopard cornerback DeOliver Davis ‘14 intercepted a Sacred Heart pass before it was negated due to a questionable roughing the passer penalty on sophomore linebacker Bobby DePietro. The call gave the Pioneers the ball back and 15 yards of additional territory, leaving head coach Frank Tavani livid.

“Calls are going to happen, the officials are human, the guy called what he saw,” Tavani said. “I simply told him in a very calm manner during the timeout that he’ll be very disappointed when he sees the film.”

Sacred Heart players swarmed Finney following the kick as the Lafayette crowd filed out in silence. It was Lafayette’s fifth loss in its past 12 season openers.

The game opened in explosive style with two touchdowns in less than 90 seconds. Lafayette’s Matt Smalley ‘16 returned the opening kickoff 98 yards for a touchdown, sending the Lafayette sideline and crowd into frenzy. Sacred Heart utilized the read-option immediately and responded with a 66-yard touchdown run by quarterback RJ Noel ‘16.

The Pioneers rushing attack sliced through the Lafayette defense all night, totaling 322 yards. Running back Keshaudas Spence ‘15 led SHU with 168 yards on 18 carries.

On the other side of the ball, Lafayette star wide receiver Mark Ross ‘14 shined, catching 11 passes for 156 yards and a touchdown. It was Ross’ fourth straight 100-yard receiving game dating back to last season and is the tenth of his career. New starting quarterback Zach Zweizig ‘15 was 24-for-32 with 282 yards and a touchdown, but had two costly interceptions deep inside Sacred Heart territory.

When asked what made Lafayette difficult to defend, Sacred Heart head coach Mark Nofri said, “They had number eight and number ten,” referring respectively to Zweizig and Ross. He proceeded to call Ross one of the “top two” wideouts he’s seen.

Lafayette simply could not capitalize on chances throughout the game. In the first quarter, Lafayette had two attempts from the one-yard line to cross the goal line but was thwarted by a stingy Sacred Heart defense.

“If we can’t get one yard, then we don’t deserve to win,” Tavani said.

Two possessions later, Lafayette found itself back at the goal line and again could not convert, this time opting for the field goal.

Sacred Heart drove 68 yards in the final minutes of the first half to score on a one-yard touchdown pass that put them ahead 14-10 entering the locker room. The Lafayette offense was stagnant for the majority of the third quarter before Zweizig found Ross in the back corner of the end zone for a seven-yard touchdown pass.

Next up for Lafayette is William and Mary on Saturday at 6 p.m. at Fisher Field. This is the second straight season the teams have met – last year, Lafayette won 17-14 to open its season. William and Mary is coming off an impressive if unsuccessful bid to upset West Virginia, ultimately losing 17-24 to the Mountaineers to start the season 0-1.