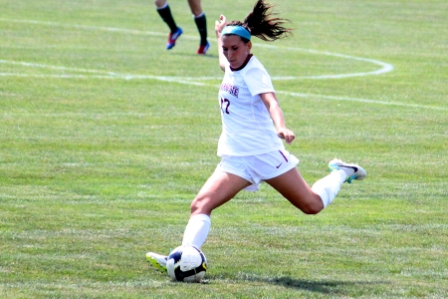 Lafayette’s first road win of the season was captured this past weekend with a 2-0 shutout against NJIT. The Leopards were the first to score with a goal from Jaclyn Giordano ’15 assisted by Allie Toru ’16 just shy of fourteen minutes in. The score remained 1-0 until the 74th minute when a cross from Nicole Lee ’15 found Anna Wissler ’16 for her first goal of the season. Throughout the 90 minutes the Leopard’s defensive unit kept NJIT at bay, allowing only five shots. Goalkeeper Danielle Sedillo ’17 made two saves and picked up her first career shutout.

The now 3-1 Leopards were predicted to finish last in the Patriot League this year during a preseason poll. Sophomore Samantha Potoczak sees this as no obstacle.

“Being ranked last in the Patriot League is motivation to prove everyone wrong. We’re going to do really well this season. As a team, collectively we’re working together a lot better, everybody is showing up to games and playing really consistently so I think we’re going to keep winning.”

Defensive center midfielder Kelly Boyce ’15 agrees. “We’re not letting our rank in the preseason poll dictate how we play. We have all the talent; we just have to utilize it”.

In his eighth season, head coach Mick Statham echoes his players. “Preseason rankings have never meant anything to me. Two years ago we were picked to finish last and we came in second. Those kinds of things are irrelevant, it’s the end of the season I care about.”

Team chemistry and morale is high, especially with a winning record.

“We want to win,“ says Alex Resinger ’15. “We have a strong core and good leadership.”

When asked about team goals, Coach Statham replied, “It’s rather cliché, but just to do our best every day. Long-term goals and making statements of things that are going to happen in November are something I don’t think we can do. As long as we give our best every day in training and take each game as it comes that’s it.”

The quote is from author Dr. Stephen Covey, whom Coach Statham is well versed on.

“That is our team philosophy. Basically the quote means you can get dragged in many different directions during the day, a lot of the stuff we tend to focus on is nonsense. The main thing for us is schoolwork, our relationships with each other and our families, and the team,” he said. “Outside of that there’s not much to really focus on. If the team keeps coming back to those main important parts of their life I don’t think they can go wrong.”