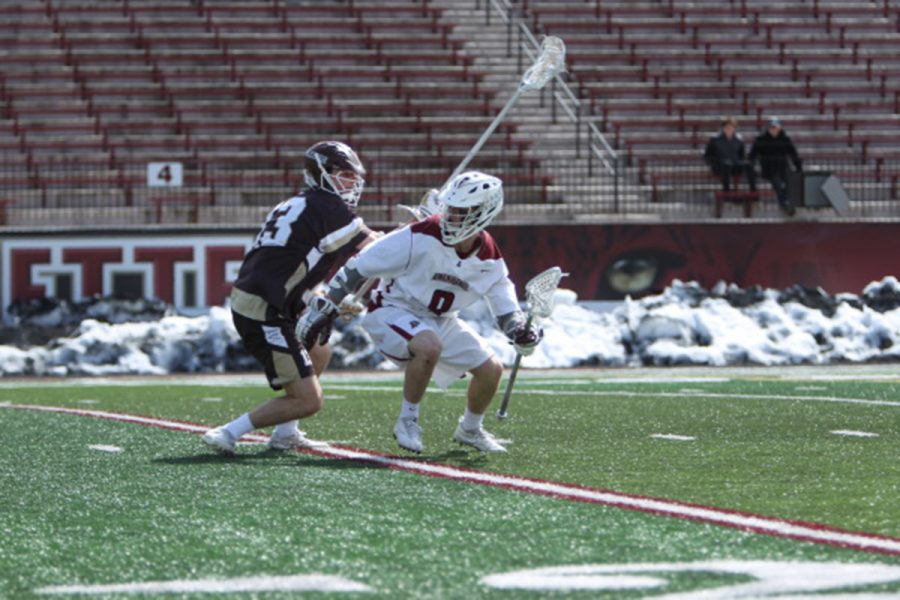 Lafayette men’s lacrosse hosted their rival, the Lehigh Mountain Hawks, at Fisher Field for a St. Patrick’s Day face-off on Saturday. They ended up on the losing side of the Patriot League matchup, 19-11. The 11 goals was a season-high for the Leopards, but a weak defensive performance delivered Lafayette a 2-7 record on the season and 0-4 in conference play.

Freshman attacker John Natoli, senior midfielder Will McCarthy, sophomore attacker Robbie Garavente and senior attacker Luke Smith all netted a pair of goals in the offensive shootout. Natoli and McCarthy also contributed one assist each. Junior attacker Conor Walters also had a strong performance on the day, totaling five assists and a goal.

This strong offensive showing came up short against a barrage of first half goals by Lehigh, including 11 in the second quarter alone. The Leopards won the turnover game with just nine against Lehigh’s 16, but Lehigh won a lopsided 27 of the game’s 33 face-offs. Additionally, the Leopards allowed 39 shots while shooting 28 of their own.

Two goalkeepers split the duty for the day. Junior Jonathon Anastos had been the go-to in the net for the Leopards so far this season, but 15 goals allowed with only two saves combined and a 10-goal deficit led head coach Ed Williams to substitute him out for the second half.

“Our mantra for this season has been ‘the next one’ and to control what you can control,” Anastos said. “No matter what’s going on in a game or in practice, our focus is on the next play. As a goalie, it’s important for me to keep this mentality as I cannot let previous goals effect my mentality on the shots to come. Lacrosse is a game of runs so keeping a level head is a very important aspect of my play.”

Sophomore Wes Moshier was the Lafayette goalkeeper for the second half. He held his own, locking down Lehigh for just four goals with three saves.

“The best part about our goalie unit this year is that we are a very tight-knit group,” Anastos said. “We push each other in practice and are close friends off the field. If anyone ever has questions or needs advice for anything, he has three other guys that have been in the exact place that he has been.”

After the rough performance, Anastos said he is looking to bounce back.

“We are incredibly motivated for the rest of the season,” Anastos said. “Although we had a tough loss, we realize that there are plenty more opportunities to meet our goal for this season which is to make to Patriot League tournament. We’re not going to allow one loss to diminish our confidence moving forward.”

Lafayette continues their league play with a game against Boston University on Saturday, March 24 at 1 p.m. at Fisher Stadium.