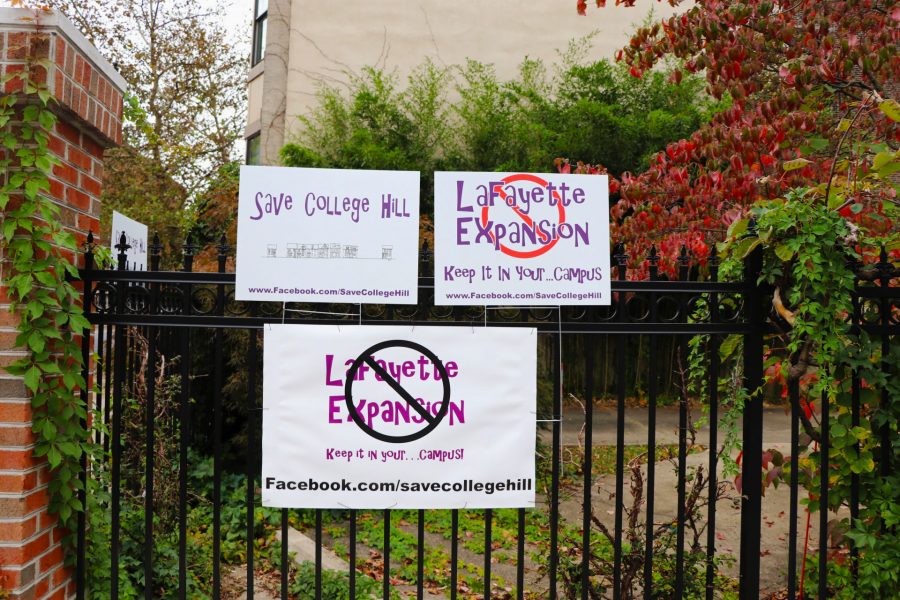 The college recently proposed to reevaluate part of their dorm project in response to continued pushback from the neighborhood. (Photo by Elle Cox '21)

In response to continued pushback from College Hill residents in regards to the McCartney Dorm Project, the college publicly announced its willingness to concede 30 percent of the beds of the new housing project and reevaluate the use of the land on the corner of Cattell and High Streets.

Vice President of Finance and Administration Roger Demareski said the college introduced this proposal at a public hearing on March 8 about the city’s proposed ordinance changes that would permit the college’s dorm project to continue.

“We have said that if the ordinance clarifications are passed, we are not going to submit 1B…as originally planned because that’s the piece that’s closest to the neighborhood right on Cattell Street,” Demareski said. The 1B parcel refers to the gravel lot across from Wawa. Originally 1B was to be the second phase of the McCartney Dorm Project and would have provided 55 beds for the expanding student body. The 1A parcel consists of 165 beds.

“So what we’ve said to the city and the neighbors is we’re willing to concede that as planned and move forward with what’s on McCartney and then collectively as a city, neighbors and college get together and decided what is the right structure or improvement for that corner,” he added.

“We’re trying to listen to the neighbors and we understand that that project being so close to the neighborhood and right on Cattell resembled the college moving in a way that gave them the most concern, so we’re willing to reevaluate that site,” Demareski said.

Lafayette professor and city planner Paul Felder has been actively involved in the opposition to the project as currently planned and said he feels this proposal from the college is no concession on their part.

“I was not expecting such an offer, nor do I feel it is a compromise at all,” Felder wrote in an email. “Our feeling has always been that the College has every right to develop its properties based on existing zoning law, and every responsibility to do such development to a standard that the College almost always builds to on its own campus.”

Additionally Felder said the gesture itself is “beside the point,” and the college should professionally assess the land to determine its best usage.

“My response is that the College should hire a professional firm to do a feasibility study establishing the ‘highest and best use’ of the property within the existing zoning ordinance,” Felder wrote.

Felder, who said he planned the meeting which was postponed until Thursday, said he and other neighbors are hoping to find more long-term solutions to the problem.

The Morning Call reported that on March 12 the Easton Planning Commission voted 5-2 against recommending the zoning amendment to be approved by City Council. Demareski said this is the second time they’ve recommended against ordinance changes, with the third time being a vote against the land development plan.

“We still preserved our right to appeal the September detail from the planning commission so we could move forward with that appeal. We could decide to move forward with another project. We haven’t come to a decision point on that,” Demareski said.

Demareski said the college would have to discuss logistics concerning timing and the growing student body with the trustees to reevaluate their next step, “but the expansion is going to happen, we’re going to build additional beds. We own that land, we’ll do something with the land,” he added.