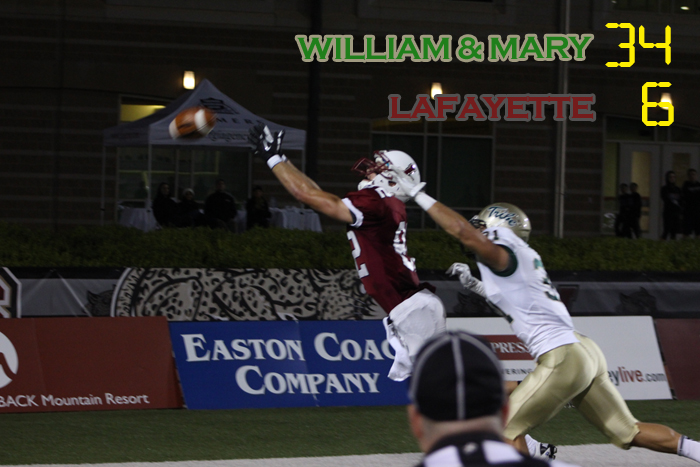 With four seconds remaining in the second quarter, Lafayette fans had their first reason to cheer. It was better described as a sigh of relief, but at that point the game was all but over. Lafayette ended a first half defined by mistakes with a field goal, but William & Mary (2-1) was just too much, scoring 27 points in the first half en route to a 34 – 6 blowout victory against the Leopards (0-2) tonight at Fisher Stadium.

“The first half of football I don’t have an explanation for,” Lafayette head coach Frank Tavani said.

The onslaught started quickly and was without prejudice. The Tribe forced a Lafayette punt and swiftly drove 99 yards in eight plays to strike first. The first play of that drive was an indication for what was to come – a 55 yard run by Tribe quarterback Michael Graham ‘14.

During the ensuing Lafayette possession, junior quarterback Zach Zweizig was wrapped up and desperately pushed an ill-advised shovel pass that was intercepted and returned 29 yards for a touchdown. Two possessions later, Zweizig was pick-sixed again. Both interceptions came under heavy pressure.

“I have to be smarter and just take the sack,” Zweizig said. “They were doing different things in their coverage. I need to read it better.”

Tribe outside linebacker Airek Green ‘15 wreaked havoc all night, returning an interception for a touchdown, forcing a fumble and mounting seven tackles, one of which was a sack.

For Lafayette, it was the first time since its 31-3 loss against Harvard on October 10, 2011 that it did not score a touchdown.

Lafayette forced a fumble on William & Mary’s first drive of the second half, leaving the remaining fans in attendance to briefly ponder a miracle comeback. Those thoughts were short lived, however, as running back Ross Scheuerman ‘15 fumbled minutes later deep in opponent territory.

“We drove the ball a good bit but did not finish off,” Tavani said.

This is the second straight game Lafayette has allowed over 200 yards rushing – Sacred Heart rushed for 322 yards last week.

Although his mistakes will litter the stat sheet, Zweizig displayed toughness throughout the evening, rising time and again after being knocked down by Tribe defenders.

“I need to move on from this and get ready for next week,” Zweizig said.

Lafayette must fix its issues quickly to avoid an 0-3 start, traveling to Philadelphia next week to take on the University of Pennsylvania, who are favorites to win the Ivy League. The list of problems is lengthy and is headlined with stopping the opponent’s rushing attack.

“We have a lot of work to do,” Tavani said. “I’m not down about this team whatsoever. I feel strongly about this football team and what they can do. Obviously I have to prepare them better.”

The Leopards travel to play Penn next Saturday at Franklin Field before a bye the following weekend.