Behind the counter: Employees at Bon Appetit 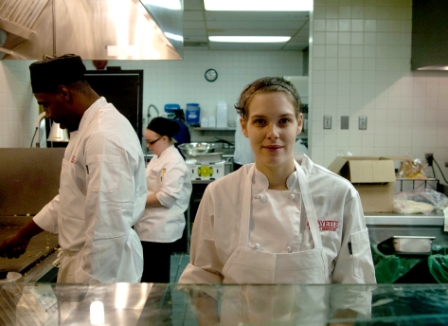 Bon Appetit’s menu is in stark contrast with Sodexo’s, but food may not be the only change from last year; management methods and employee relations have also changed, according to some workers.

“Basically, Bon Appetit lied to the employees, lied to the college,” said a source, who requested to remain unnamed. The source claimed that in a meeting Bon Appetit had with then-Sodexo employees over the summer, they promised to keep their employees’ weekly hours and vacation time the same and have conversations with all their employees about their availability. The source reported that those availability talks did not happen.

“They just made up a schedule and expected us to work it,” the source said.

This is not the first time Bon Appetit has had trouble with worker and management relations. Campus Times, the University of La Verne’s student newspaper, said that in 2012 Bon Appetit workers at the school “voiced concerns about having too many jobs, not having enough time to take breaks and being ignored and disrespected in the workplace.” Workers at the University of Pennsylvania unionized in 2013, according to The Daily Pennsylvanian.

Not all food workers at Lafayette are upset about the changes.

Carol Williams, an employee who worked at Lafayette Dining Services for almost sixteen years—including the Sodexo era—only expressed enthusiasm for the change and is grateful for the job she has.

“I think at the beginning it was very rough, because we were so used to one thing, and they were used to another, and we had to make it work,” she said. “But once we started communicating it was okay.”

She added, “in this economy, be thankful you have a job.”

Daren Cahoon, a former employee of Bon Appetit, was fired after three no-calls-no-shows, he said in a phone interview on September 16.

When he worked for Sodexo, Cahoon said he was able to get the hours and time off he needed in order to visit his disabled mother, who was diagnosed with cancer, in the hospital on the weekends. Cahoon said that he had a meeting with Joel Blice, general manager of Bon Appetit at Lafayette College, requesting the time off he needed to take care of his mother, and help her take care of his younger sister.

When Blice was asked if Bon Appetit kept the same hours for their employees as Sodexo had, he responded, “There were no guarantees made. I think we provided reasonable accommodation. I mean, where we could.”

Blice was asked about his experience with Cahoon in an interview. He maintained that he could not comment about a specific employee because it was a violation of company policy.

In addition to the changes made in management policies, the anonymous worker said Bon Appetit’s benefits for health insurance have higher co-pays and deductibles for less coverage than Sodexo’s did. Blice said he was unaware of differences between Bon Appetit’s benefits and Sodexo’s, but he asserted that he knows Bon Appetit has “a great benefit package. I mean, I have their benefits.”

The worker said Bon Appetit hired temporary employees, who are not entitled to vacation time or benefits.