MGMT moves from the mainstream 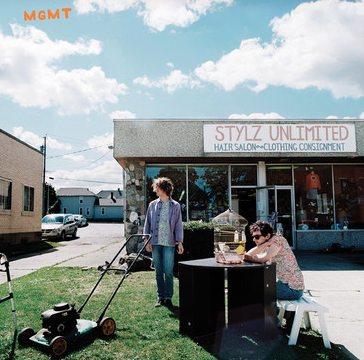 Who doesn’t love shirtless old men with condiment messages slathered on their stomachs?

Bizarre eccentricity is just the type of thing you can expect to see in MGMT’s music video for their newest single, “Your Life is A Lie.” The most nondestructive way I can describe the video is by relating it to a creepier version of Miley Cyrus’s controversial music video, “We Can’t Stop.” The awkward and all together freaky tone of this music video is a preview of MGMT’s new album, MGMT (yes, an extremely original title), which was released on Tuesday.

MGMT made a name for themselves in 2010 at the Grammy Awards when they were nominated for Best New Artist and Best Pop Performance By A Duo Or Group With Vocals for their hit, “Kids.” MGMT created an eager and enraptured following through their timeless melodies in “Electric Feel,” and “Time to Pretend.”

The uplifting and crisp beats that made MGMT popular, however, are slowly disappearing from their sound as their new album emerges. The band now seeks to embrace their image as a self-described psychedelic rock band and move in a direction that is south of the Top 40. MGMT’s co-founder, Andrew Van-Wyngarden, describes the necessity for this sound departure – to establish originality amongst mainstream music.

“[MGMT] has been playing live since 2007 as essentially a psychedelic rock band, but people came to our shows expecting Daft Punk,” he said.

Van-Wyngarden, co-founder Ben Goldwasser, and the rest of his Brooklyn based band-mates recorded MGMT in near isolation in Upstate New York. Perhaps it was the seclusion that rendered such a trippy album (all work and no play makes Jack a very dull boy – if you catch my drift.) The album was inspired entirely by improv jam sessions where the group would experiment with different tunes and percussions. The “Your Life is A Lie” music video reveals one mystery instrument – the rhythmic hitting of a metal spittoon.

MGMT’s new use of these chaotic noises dominates the melodies beneath them. Those who once followed MGMT for their hit songs will be greatly disappointed in the new release. MGMT is much more alternative, with a pandemonium of new sounds reminiscent of Crystal Castles, an offbeat electronic band – a musically talented but lesser known group. Goldwasser seems perfectly content with the band’s music transformation and the rampant cynicism surrounding it.

“We’re more about inside jokes and doing things that might take a little while to appreciate,” Goldwasser said.

Perhaps the album’s self-title is not so unoriginal – it is an indicator that the band has claimed that the vibe of this album, is their identity. It may not be the sound that some fans would have hoped for, but even the album’s most audible critics must appreciate MGMT’s quest for artistic liberty over album sales. Nevertheless, I am eager to see how this album fares in the music charts. Take the success of Kings of Leon (with the release of Mechanical Bull September 24), who have kept their sound consistent across all records. Perhaps changing their sound may prove to be risky business for MGMT.