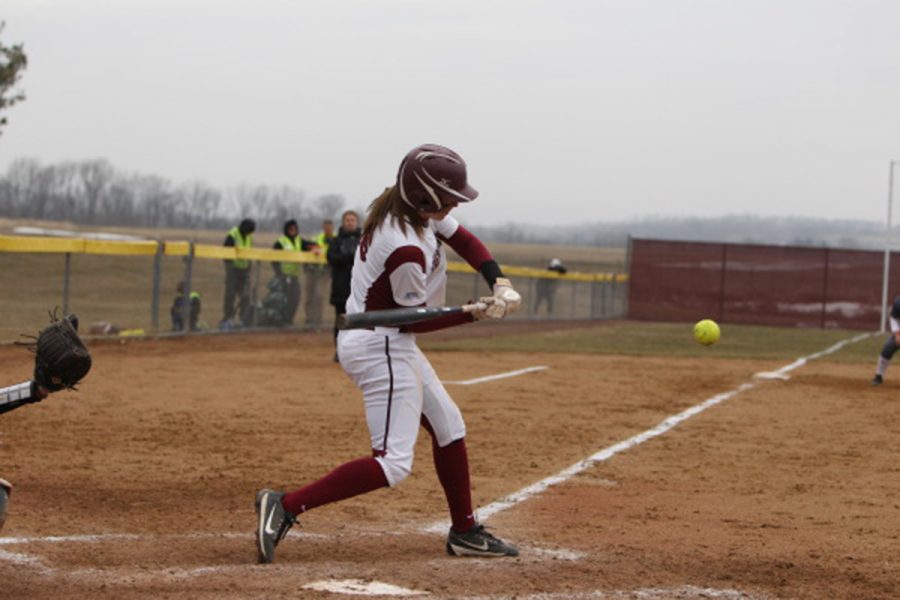 This week The Lafayette sits down with recent Patriot League Softball Player of the Week, Brooke Wensel.

AJ Traub: You recently earned Patriot League Player of the Week after hitting .833 with two home runs in three games. What was it like to earn the award?

Brooke Wensel: It was humbling. Everyone on the team gets excited when someone wins something like that. It gave us some excitement for the momentum we needed going into the Lehigh series.

AT: How is the team dealing with the small roster and a long season?

BW: With the small roster, you have to accept your role and you can’t expect other teammates to fulfill your responsibilities because there’s no one else to pick from off the bench, so you have to go with what coach tells you to do and fill out your duty as a player. On the bright side, it’s not a 50-man roster where it’s hard to mesh well because it’s so big. It’s better that it’s small because we can bond well and play as a team. As for the long season, the record or stats don’t say anything about a team or a player. In games that we’ve lost, the stats will say something different, but we’ve been in control of games and we’ve lost the game ourselves rather than the other team beating us.

AT: You’ve won numerous awards, including Patriot League Defensive Player of the Year, All-Patriot League Second Team and several Rookie of the Week awards. How have you stayed at the top of your game throughout your career at Lafayette?

BW: Dealing with adversity is big. Having a head coaching change and having several minor coaching changes each year is tough, but staying positive throughout all of that stuff helps a lot in team dynamic and individual focus. Having a competitive edge all the time helps me continue what I’ve already done here so far. In my eyes, a strong player is someone who is tough and gritty. Striving to meet new goals every year is really important to me.

AT: As you continue to perform, how has your leadership role changed with the team?

BW: I have a strong presence on and off the field, especially as a shortstop, with my team because I’ve developed trust with them. They look to me as a guide and we hold each other accountable in everything we do. I’ve developed captain-like traits more and more after every season that passes.

AT: You’ve raised your batting average significantly from last season as well as reaching your career-highs in home runs and RBIs. Have you made changes to your batting approach?

BW: I’ve started to focus less on overthinking everything and more on just doing. Going back to the basics and literally just see-ball-hit-ball. Every swing is your hardest swing.

AT: You have an incredible defensive record, with a career .939 fielding percentage. How have you worked to excel at the shortstop position?

BW: Our newest assistant coach is really good with the infielders right now, and she’s taught me things that will help me develop my skills further. In softball, I look at it like you have to play two games: offense and defense. When you’re not batting well, you can flip the switch and have your best defensive game.

AT: You have 25 career hit-by-pitches. How does the team react to opposing pitchers hitting you and [senior 2B] Samantha Sweigart (28 career HBP) so often?

BW: Our team thrives when they hit us because it pumps us up even more. Sam and I compete for the hit-by-pitch career record. She currently is ahead of me, but Sam, if you’re reading this, I’m coming for ya!

AT: What goals do you have as you finish your junior year and have another year to go at Lafayette?

BW: Biggest goal is to make it to the Patriot League tournament. After that, it’s to win the tournament and go to NCAA regionals. Individually, I hope to be player of the year at some point.

BW: It’s funny that you ask because I actually practiced with the women’s basketball team sometimes to help them out with their preparation for games. I also played baseball with guys until I was 15, so that helped me with my toughness and my skill set as a player. Basketball helps with conditioning and endurance and being more agile. Baseball helped me develop the arm I have and my hand-eye coordination. I was a goalie for soccer, so that helped with my defense.

AT: Do you have a favorite memory with the team?

BW: When we beat Lehigh 3-1 in the second game after losing to them in the first game of the series last year.

AT: What is your favorite pro team?

BW: Philadelphia Eagles, hands down. I’ve loved them since I was 6. #FlyEaglesFly

BW: I’m pretty good with the piano and anything art-related.